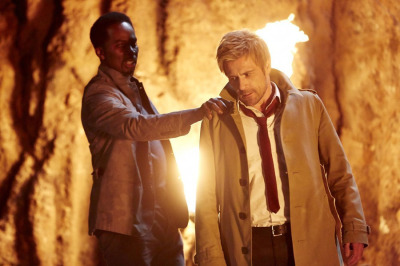 We meet John Constantine (Matt Ryan) in a psychiatric care facility where he’s checked himself in in an attempt to purge himself of the guilt he feels for a massive cockup that cost the live and soul of a nine-year old girl named Astra. The possession of a fellow patient persuades him that he has work to do – in spite of his less than stellar past.

Liv Aberdeen (Lucy Griffiths, True Blood) is a young woman who happens to be the daughter of a deceased friend of Constantine’s – and targeted by a demon from the Inner Circle. When he tries to help her – after a very strange series of occurrences – she refuses his help. It takes the death of one of her best friends and another near fatal situation – and a fortune cookie fortune that reads ‘Trust him’ (following one that was blank) – before she even begins to believe she needs his help. The fact that her late friend has apparently tried to kill her doesn’t hurt.

Constantine was developed by David S. Goyer and Daniel Cerone from the DC comics series Hellblazer, a very dark and weird series intended for a more mature audience. The two who wrote the story for Non Est Asylum, which was scripted by Cerone. 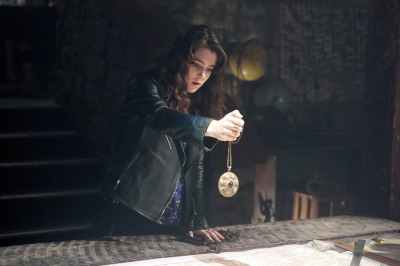 In what has to be a bravura PR effort, NBC sent out its screeners for Non Est Asylum accompanied by the first volume of Hellblazer: John Constantine. It introduced the character and set up a multi-issue arc that was definitely not meant for kiddies. The surprise isn’t that a network actually got Constantine to air – it’s that the show does capture the character’s arrogance, sarcasm and willingness to do whatever it takes to get the job (in this case, exorcism) done.

What’s not a surprise is that Constantine can’t match the content of the comics – just as a start, Constantine is a hard drinking, womanizing, chain smoking bastard who can cuss with the best of them and doesn’t hesitate to use ‘friends’ as bait to get demons (even if it kills them, or worse).

True, in the series premiere, he uses Lucy as bait, but he’s willing to take on the demon himself rather than let her be taken – and there’s no smoking to be found, though he does look a bit sallow, so it might be implied that he has a nicotine problem. In a departure from the original cut, the demon appears as a hellish version of Constantine – setting up one of the comics’ ongoing themes that he is his own worst enemy (or at least can be).

In the original cut of the premiere, Lucy was set up to be a series regular, vital to Constantine for her ability to scry – divine where bad stuff was going to happen – but for some reason (apparently she didn’t go over too well with critics and those lucky fans who saw the early cut) she is written out in a somewhat clumsy bit of writing that is balanced out by a terrific teaser that introduces a replacement who does come from the comics and has unique abilities of her own.

Something that remains constant is that – despite his protestations that he works alone – Constantine has allies of sorts: the angel Manny (Harold Perrineau, Lost), who convinces him to help because ‘something big is coning’; a former partner, Ritchie Simpson (Jeremy Davies, Lost, Justified) – if only for the premiere (hopefully he’ll be back) and Constantine’s oldest friend (largely because of his survival skills), cab driver Chas Chandler (Charles Halford, True Detective), who may have been named after The Animals’ bass player… 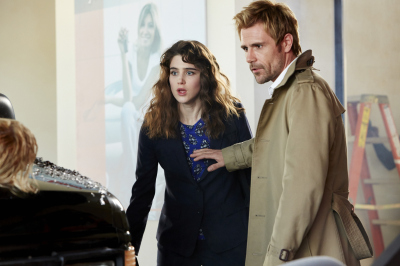 It will be interesting to see how Constantine handles a lead character who drinks, smokes and doesn’t shy away from getting laid – a lot. The premiere has a lot of backstory and character details to produce – not to mention setting a tone and coming up with convincing effects. Despite its supernatural setting, it’s not particularly scary, though that has to be coming for the show to build and keep an audience. For now, it’s enough that it lays the groundwork satisfactorily, for the most part (at least one info dump is handled awkwardly).

Matt Ryan is a solid series lead as Constantine. He gets the character’s contradictory nature – arrogant but self-deprecating; not heroic, but capable of stepping up; wry and sarcastic, but with the tiniest bit of heart. His performance may make up for what the series can’t get too deeply into and he’s got a screen presence that’s magnetic as all hell (if you’ll pardon the expression).

Perrineau hasn’t had much to do, so far, except be imposing and mysterious – but he does it well enough to genuinely intrigue. Halford is instantly likable as Chas which balances out the edge that Ryan has to walk as a character that is not inherently likable but around whom the series based.

Non Est Asylum was directed by Neil Marshall (Game of Thrones, Black Sails) a genre veteran. He keeps things moving but his pacing is occasionally detrimental because there are moments when we really need to take a breath (see: awkward info dump). He does have a knack, though, for framing action well and knowing when to get the most impact from a close-up.

Overall, Constantine is dark, supernatural fun that will undoubtedly develop into a scary enough series to make it a suitable Friday night freak fest (plus, having read the comics – and getting the quick refresher course from the provided graphic novel – I have a good idea of what’s supposed to happen next…).

Photos by Quantrell Colbert/Courtesy of NBC