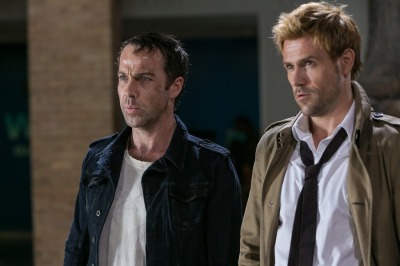 A Feast of Friends opens with a sweaty, nervous man going through customs. Because he looks so suspicious, he’s pulled aside and his only luggage, a turquoise jar, gets broken – unleashing a host of bugs that swoop into the security guard’s mouth.

When John Constantine (Matt Ryan) and Zed (Angélica Celaya) pull up to his base of operations, they find that someone – or something – has forced its way in. They find the sweaty man floating inside. Turns out it’s Gary Lester (Jonjo O’Neill), an old friend – who was one of Constantine’s team when he screwed up in Newcastle and got an eight-year old girl’s soul condemned to Hell.

Acting on Gary’s story, Constantine tries to bottle up what appears to be a hunger demon but it’s far more powerful than he thought and he barely escapes with his soul, such as it is, intact. Which leads him to consult a shaman, Nommo (Charles Parnell), who insists that Constantine must see the situation through his eyes. Which, in turn, leads to a new plan.

As usual, Constantine lets his arrogance get in the way before accepting that he needs help – possibly sparked by an enigmatic appearance The Angel Manny (Harold Perrineau). Zed gets a chance to show her widening abilities, too – it’s her lead that sends Constantine to Nommo. 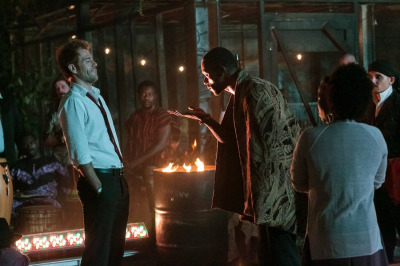 An introductory note on the NBC press site notes that the episode’s effects (sound, visual, CG) are not final, but they looked pretty finished to me – and some of them are spectacular for TV. Especially the demon, the occurrence during Constantine’s visit to Nommo, and Zed’s visions.

The biggest problem for the episode probably won’t be noticeable to those who haven’t read the comic: while the events of the episode cover the major beats of the comic, Constantine’s motivations and character take a massive left turn at the end (well telegraphed, too). The degree of change could be summed up by saying that the TV Constantine is a sneaky bastard but he’s not the complete sonuvabitch of the comic.

A Feast of Friends captures the basics of the comics story – the script, by Cameron Welch, tries really hard to be faithful to the comic’s major plot points. The result is that there are more than a few real scares – not the least in the manner in which Nommo helps Constantine see through his eyes (altogether now: Eeeeeeeewwwww!).

O’Neill is extremely effective as Gary Lester and Celaya gets a few moments to shine but, as usual, Ryan has to do most of the heavy lifting – and it’s he and O’Neill who make A Feast of Friends a solid hour of dark, twisted entertainment.

With the need to hold back, just a tad, for network TV – even in late evening – A Feast of Friends still doesn’t match its companion show, Grimm, for sheer fun. On the other hand, it does show a marked improvement over the last few episodes in terms of overall consistency.

Right now, Constantine is the least successful comics adaptation on network TV and slipping ratings may not give it much more time, but it is becoming the solid show that the premiere was setting up.