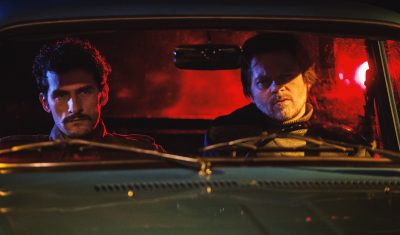 Amazon’s Comrade Detective is a Romanian propaganda tool in the guise of a cop show – the masters for which have been painstakingly restored by the Romanian Film Preservation Society – which has been rediscovered and dubbed into English by a host of first-rate American actors.

The six-episode first season of Comrade Detective opens with Detectives Nikita Ionescu (Christian Popa, voiced by Beck Bennett) and Gregor Anghel (Florin Piersic Jr./Channing Tatum) about to close in on a perpetrator when their captain orders them to stand down. 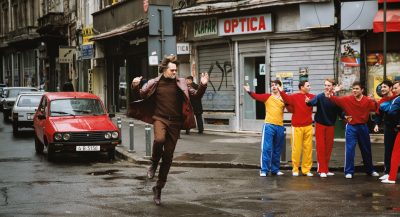 They don’t and in the ensuing action, a man in a President Ronald Reagan mask kills Nikita.

Country cop Detective Iosif Baciu (Corneliu Ulici/Joseph Gordon-Levitt) comes into Bucharest to help track down the man who killed his old friend, Nikita (the two wrestled for Romania when they were adolescents). There’s an initial friction between Gregor and his new partner, Iosif that is resolved by Iosif saving Gregor’s life and they’re suddenly best of pals (though Gregor’s friendly nickname for Iosif is quite obscene).

In order for a satire to work, it has work as an example the subject it satirizes – and Comrade Detective works as cop show. Gregor and Iosif are good at their jobs and surmount the obstacles placed in their path.

The involvement, right from episode one (The Invisible Hand), of the American embassy in Bucharest, gives our detectives a place to start looking (the case Gregor and Nikita were working on is clearly ideological). 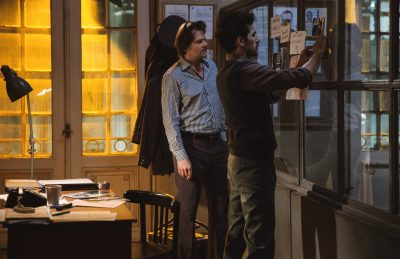 The American ambassador, Sally Smith (Kim Basinger), seems to provide a clue, but it’s her assistant, Jane (Olivia Nita/Jenny Slate) who sparks the most interest.

The satire comes in odd moments when a character takes moment to make a statement about American music brainwashing Romanian children as the first step to turning them into whores, or a TV set in a bar being set to a chess match – with everyone in the bar cheering or booing moves, or seeing two fat Americans in their embassy chowing down on massive piles of cheeseburgers.

The wit in the series is both highbrow and lowbrow – when Iosif confronts his daughter (who has snuck out of the house to listen to American music) with the concept of brainwashing, she dashes the radio to the ground. He responds with ‘You didn’t have to break the radio. There’s a Bartok concerto on tomorrow…’

Comrade Detective takes aims at more than just American ideology and cop show tropes, it also takes swipes at organized religion (a sequence with a Catholic priest delivering his sermon in his underground church moves in a very strange direction…), Ayn Rand and much more. 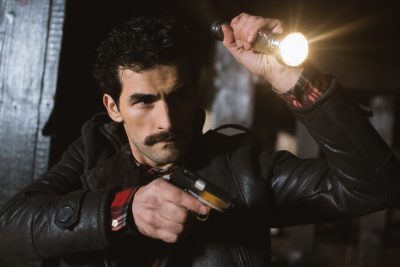 The creation of Brian Gatewood (Dice) and Alessandro Tanaka (Dice), Comrade Detective takes the tropes of the ‘80s cop show and repurposes them as the hook for an imagined series of propaganda films by the Romanian state.

Gregor and Iosif tail suspects far too closely, or play Good Cop/Bad cop (until one suspect provokes them so much that they become Bad Cop/Very Much Worse cop). They play hunches, follow leads and are continually mocked by two other detectives – Dragos (Florin Galin/Jason Mantzoukas) and Stan (Ion Grosu/Jake Johnson) who seem to be pretty much incompetent and lazy.

When Gregor and Iosif get too close, they get framed (cue escape from prison bus); when they keep getting closer, Iosif’s wife, Sonya (Diana Vladu/Chloe Sevigny) is kidnapped.

Comrade Detectives is exactly the kind of show you could imagine Elizabeth and Philip Jennings watching if they had remained in Soviet Russia.

The series is directed with suitable enthusiasm by Rhys Thomas (SNL, documentary Now!). He nails every beat of the cop show and his handling of the Romanian propaganda is slick and unforced – but timed for maximum impact.

Comrade Detective is great fun – and at six episodes, a bingeworthy entertainment.