Gibson is back, taking us to the edge and into the sinister darkness beyond on Tuesday May 11, 2010 as Edge of Darkness comes to DVD, Combo Pack, Blu_Ray and Download 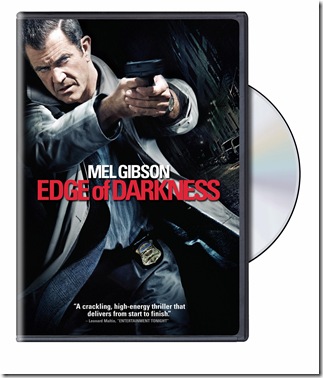 The bullet that killed his daughter was meant for Boston cop Thomas Craven or that’s what police brass and Craven himself think, but that’s not what the investigation finds. Clue after clue and witness after witness, the search leads him into a shadowy realm where money and political intrigue intersect. If Craven wasn’t a target before, he and anyone linked to his inquiry has become one. Mel Gibson stars in his first screen lead in eight years, Martin Campbell (Casino Royale) directs from a screenplay co-written by The Departed’s William Monahan.

Edge of Darkness marked actor Mel Gibson’s return to a big screen leading role since his role in the 2002 thriller, Signs.  Released worldwide in late January of 2010, Edge of Darkness was not the huge box office success of earlier Gibson led motion pictures but did manage to end it’s run in late April with a respectable $89M total box office gross which was $29M over the cost of the $60M budget. 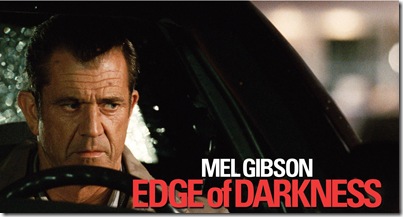 Watching the DVD screener sent out for this movie’s release onto DVD, Combo Pack, Blu_Ray and Download was the first time I had ever seen Edge of Darkness. While as a movie viewer, I have always enjoyed Mel Gibson’s led movies, for me this one just didn’t hold up to the hype about the suspense and tension.

One of the blurbs for this movie states that “Mel Gibson stars in his first screen lead in eight years, making Craven’s grief palpable and his quest for payback stone-cold and relentless.”

Frankly while I do think that Gibson gave the grieving father of Thomas Craven a sharp edge, overall I found the pacing of the movie to be stone cold plodding. However Edge of Darkness does pick up the pace towards the end of the movie and there are notable performances by Ray Winstone and Damian Young.

Edge of Darkness is filled with the usual suspects of corporate villains and a vengeful cop/parent but it’s got that Mel Gibson style to it that makes the movie worth watching if only to see a Hollywood leading man who isn’t afraid to let it show that he’s not a “Pretty face” anymore but has settled into the weather beaten look of solid actor who relies on his craft more than on his looks to bring a story to the silver screen..or this case to the TV screens.

To purchase Edge of Darkness on DVD, Combo Pack, Blu_ray or download Check out the Warnerbros online store.