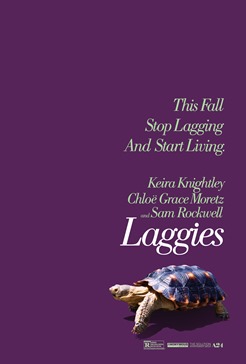 It seems like, more and more, there are movies devoting themselves to coming age stories about people who should have come of age a decade earlier. The latest in this odd sub-sub-genre is Laggies, about Megan, a twenty-eight year old woman who hides out in the home of Annika (Chloe Grace Moretz) a young friend for a week as she faces the drama of being a grown up – much to the confusion of Annika’s father (Sam Rockwell)..

Laggies will be in select theaters on October 24th. Check out the trailer after the jump.

Having spent her twenties comfortably inert, 28 year old Megan (Keira Knightley) reaches a crisis when she finds herself squarely in adulthood with no career prospects, no particular motivation to pursue any and no one to relate to, including her high school boyfriend (Mark Webber).  When he proposes, Megan panics and given an opportunity to escape – at least temporarily – she hides out in the home of her new friend, 16-year-old Annika (Chloë Grace Moretz) and Annika’s world-weary single dad (Sam Rockwell).