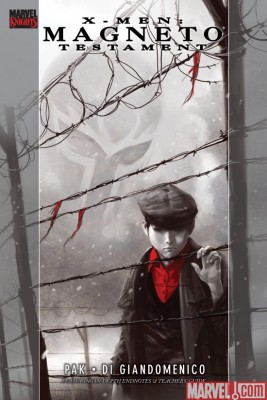 On May 28, Marvel Comics will release the highly anticipated X-Men: Magneto Testament  hard cover, a collection of the five-issue critically acclaimed limited series from the fan favorite team of New York Times Best-Selling Author Greg Pak (Incredible Hulk, Incredible Hercules) and Carmine Di Giandomenico. This collector’s edition hard cover will be jam-packed with amazingly powerful extras, including a story never before published, and arrives with a suggested retail price of $24.99.

Today, the whole world knows him as Magneto, the most radical champion of mutant rights that mankind has ever seen. But in 1935, he was just another schoolboy — who happened to be Jewish in Nazi Germany. The definitive origin story for one of Marvel’s greatest icons begins with a silver chain and a crush on a girl — then quickly turns into a harrowing struggle for survival against the inexorable machinery of Hitler’s Final Solution.