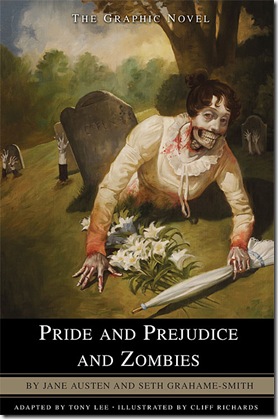 The acclaimed mash-up of the classic Jane Austen novel with a harrowing tale of a zombie infestation, Pride and Prejudice and Zombies, was a game-changer for genre literature – so, naturally, it was ripe for adaptation as a graphic novel.

Although, unfortunately, Austen’s prose is mostly absent [it being difficult to condense many hundreds of pages of prose into one hundred and seventy-six], all of the most important plot points from Pride and Prejudice are here: Mr. Darcy’s unfortunate first impression on Elizabeth Bennet; Jane Bennet’s reticence to make her feelings known to Mr. Bingley; the marriage of the clergyman, Mister Collins, to the fragile Charlotte Bennet; the perfidy of Mister Wickham, and so forth – all given a unique spin as a result of the zombie infestation planted into the story by Seth Grahame-Smith.

The book was adapted by Tony Lee [X-Men, Spider-Man, Wallace & Gromit] and illustrated by Cliff Richards [Buffy the Vampire Slayer].

Lee’s tone is somewhere between Austen and Joss Whedon. The humor is dark [Charlotte’s wasting disease is the zombie virus, for example], but he keeps the dialogue in period – with one or two moments of anachronism that accent the attitudes of the Bennet sisters [and especially Elizabeth]. As much as possible, given the horror of the zombie infestation, he remains true to Austen’s original [Mrs. Bennet, for example, wants her girls to marry into money; Mr. Bennet wants them to be happy] – only taking liberties when absolutely necessary.

Richards’ style is instantly recognizable to fans of the Buffy comic and he does a lovely job balancing the prim propriety of the period, especially during family dinners and balls that enable us to get to know the characters. He has an easy facility for shifting from drama to humor without seeming to do anything different. It’s a matter of layout and shifting emphasis on aspects of each character. He uses very clean lines with just enough detail to bring a scene to life – even though a period work like this might tempt an overabundance. The art is in beautiful black and white which gives a period atmosphere and well as reflecting classic horror movies – an artistic decision that works really well.

Pride and Prejudice and Zombies, the graphic novel, is paced much faster than any Austen novel. There’s a lot of story and little time [and space] to tell it in this format. It is to Lee and Richards’ credit that they capture the most important beats of the Austen original while letting the Grahame-Smith material fly. The end result is almost startlingly entertaining – and a solid entry in Del Rey’s continuing line of graphic novels [right up there with the superb Dresden files books!].