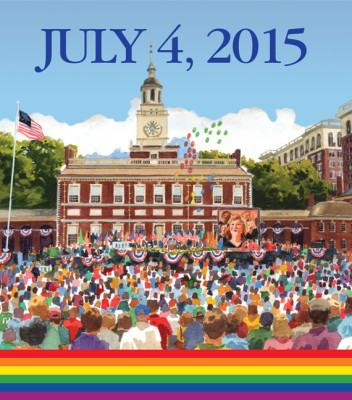 Comcast has donated $1.5 million in airtime to broadcast a public service announcement marking the 50th Anniversary of the founding of the LGBT Civil Rights Movement at Independence Hall.

The 30-second PSA will be broadcast nationally in May and June. You can check out the PSA following the jump.

The PSA, which can be viewed at: https://www.youtube.com/watch?v=f-Hxm3KAvHM or at www.lgbt50th.org will air nationally in May and June 2015.

The organized LGBT civil rights movement was launched when activists from New York, Washington D.C., and Philadelphia staged demonstrations for equality each Fourth of July from 1965 to 1969. When 40 activists picketed in front of Independence Hall in 1965, it was the largest demonstration for gay equality in world history.

Organized by the father and mother of the LGBT civil rights movement, Frank Kameny and Barbara Gittings, these “Annual Reminders” laid the groundwork for the Stonewall riot in 1969. After Stonewall, the Gay Pioneers suspended the Annual Reminders and turned their energies to helping organize the 1970 march from Greenwich Village to Central Park marking the first anniversary of Stonewall.

From July 2 to 5, in Philadelphia, the National LGBT 50th Anniversary Celebration includes panels, Gay Pioneers screening, fireworks, daily parties, LGBT history exhibits, concerts, National Interfaith Service, wreath laying at the Gay Pioneers historic marker, and street festival in the gayborhood with the highlight the one-hour LGBT 50th Anniversary Ceremony on a large stage in front of Independence Hall on July 4th with Wanda Sykes as the Master of Ceremonies.

There is no registration fee and most programs are free.