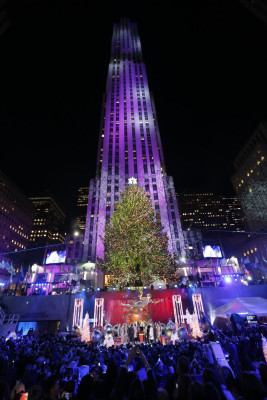 On December 2nd, NBC will celebrate the lighting of the Rockefller Center Christmas tree with the 83rd Annual Christmas in Rockefeller Center.

NBC’S ANNUAL ‘CHRISTMAS IN ROCKEFELLER CENTER’ CELEBRATES THE MUSIC OF THE HOLIDAYS LIVE ON WEDNESDAY, DEC. 2

Once again, “Green Is Universal,” NBCUniversal’s sustainability initiative in partnership with the Arbor Day Foundation, will kick off its annual tree-planting campaign during the “Christmas in Rockefeller Center” broadcast. This year, viewers can “GIF’t a Tree” to a national or state park or forest, by using #GIFtATree or visiting www.greenisuniversal.com to create and share an animated holiday tree GIF. Each action will contribute to the Arbor Day Foundation’s tree planting efforts, funded by a $25,000 donation from NBCUniversal.

Prior to the primetime telecast, an additional live hour of the special will be broadcast on select NBC stations (7-8 p.m. ET). Check local listings.

Andrea Bocelli is the most successful classical solo artist ever and one of the best-selling artists in music history, with more than 80 million albums sold worldwide. He is also credited with enabling the core classical repertoire to cross over and find a home atop the international pop charts. He has had the honor of performing live in front of three presidents of the United States, three popes and royal families all over the world. Most recently, Bocelli released his eagerly awaited album “Cinema” on Sugar Music/ Universal Music Group and Verve Music Group in the U.S. He is also set to kick off a tour in the U.S. on Dec. 2 at the U.S. Airways Center in Phoenix. The tour also includes dates at the MGM Grand in Las Vegas on Dec. 5, Madison Square Garden in New York on Dec. 9, the Wells Fargo Center in Philadelphia on Dec. 12 and the Verizon Center in Washington, D.C., on Dec. 13. www.andreabocelli.com

Los Angeles-born, New York-raised pop star Andy Grammer has gone from a hustling street performer on Santa Monica’s Third Street Promenade to triple-platinum selling recording artist. With his 2011 self-titled debut album, Grammer became the first male pop star in a decade to reach the Top 10 at Adult Pop Radio on his first two singles, “Keep Your Head Up” and “Fine By Me,” certified platinum and gold respectively. Grammer’s second album, 2014’s critically acclaimed “Magazines or Novels,” continues his disarming success with his smash hit “Honey, I’m Good.” The triple-platinum-selling song was #1 on adult pop radio and top 10 across 3 radio formats, garnering over 70 million views on YouTube and 60 million streams on Spotify.  In August, Grammer released follow up track and current radio chart topping single, “Good To Be Alive (Hallelujah),” from the just-release deluxe edition of “Magazines Or Novels.” Grammer recently starred on ABC’s “Dancing With The Stars” and will perform “Good to Be Alive (Hallelujah)” on NBC’s “Macy’s Thanksgiving Day Parade” on Nov. 26th.  https://twitter.com/andygrammer

Grammy Award-winning sibling trio The Band Perry have proven an unstoppable presence in music.  The 2010 album “The Band Perry” delivered five hit singles: the sextuple-platinum chart-topper “If I Die Young” (whose video is now Vevo-certified for reaching 100 million plays), the platinum-selling “You Lie” and “All Your Life” (a #1 single), “Hip to My Heart” and the gold-certified “Postcard From Paris.” For their gold-certified 2013 follow-up “Pioneer,” The Band Perry offered up the platinum-selling #1 singles “Better Dig Two” and “DONE.” (a first for Reid and Neil as songwriters), as well as smash hits “Don’t Let Me Be Lonely” and “Chainsaw.” Kicking off the “We Are Pioneers” world tour in late 2013, the trio played hundreds of venues from Seattle to Sweden.  In February 2015, The Band Perry won the Grammy Award for Best Country Duo/Group Performance, having also earned multiple awards from the likes of the Country Music Association, CMT Music Awards, the American Country Awards and the Academy of Country Music. Recently named ambassadors for Teen Cancer America (a charity founded by the Who’s Roger Daltrey), The Band Perry are putting the finishing touches on their third studio album. The band’s anthemic new single, “Live Forever,” and its accompanying music video are out now. For tour dates and more on TBP, visit www.thebandperry.com.

Multi-platinum, Grammy-nominated singer-songwriter Carly Rae Jepsen released her critically acclaimed new album E•MO•TION in August via (Schoolboy Records/Interscope).  E•MO•TION has earned Jepsen a host of rave reviews, with several outlets – including TIME, Entertainment Weekly, People, Stereogum, Vulture, Complex, Newsday, Noisey, US Weekly, and PopCrush – declaring it the pop album of the year so far.  The first single “I Really Like You” became a global Top 40 hit, and its video is Vevo Certified with over 100 million views. Jepsen’s newest music video, for her single “Your Type,” recently premiered on Vevo with over 1.5 million views and counting.  E•MO•TION is the follow-up to Jepsen’s U.S. debut album “Kiss,” which featured her blockbuster break-out hit “Call Me Maybe.” The single climbed to No. 1 on the iTunes Singles charts in over 47 countries and has sold over 18 million singles worldwide to date. It earned Jepsen 2012 Grammy nominations for Best Pop Solo Performance and Song of the Year.  Jepsen spent much of 2014 starring in the Broadway production of “Rodgers & Hammerstein’s Cinderella,” earning rave reviews, and in 2016, will star as Frenchy in the FOX production of “Grease: Live.” www.twitter.com/carlyraejepsen

As a recording and touring artist, James Taylor has touched people with his warm baritone voice and distinctive style of guitar-playing for more than 40 years, while setting a precedent to which countless young musicians have aspired.  Over the course of his celebrated songwriting and performing career, Taylor has sold more than 100 million albums, earning gold, platinum and multi-platinum awards for classics ranging from “Sweet Baby James” in 1970 to “October Road” in 2002.  In 2015 Taylor released “Before This World,” his first new studio album in 13 years, which earned him his first ever #1 album. He has won multiple Grammy Awards and has been inducted into both the Rock and Roll Hall of Fame and the prestigious Songwriters Hall of Fame.  Most recently, Taylor was awarded the distinguished Chevalier of the Order of Arts and Letters by the French government and the National Medal of Arts. Taylor will also receive today the Presidential Medal of Freedom, the country’s highest civilian honor, at a ceremony at The White House.  www.jamestaylor.com

Grammy Award-winning singer, songwriter, actress and philanthropist, Blige is a figure of inspiration, transformation and empowerment, making her one of the defining voices of the contemporary music era. With a track record of eight multiplatinum albums, nine Grammys (plus a staggering 32 nominations), a 2012 Golden Globe nomination, four American Music Awards and worldwide sales of more than 50 million albums, Blige is a global superstar.  In 2013, Blige released her first-ever holiday album, “A Mary Christmas,” in collaboration with legendary producer David Foster. In 2014, she released her 13th studio album, “The London Sessions,” which reached No. 1 on the Top R&B Albums chart. The documentary for Blige’s “The London Sessions” premiered at the Tribeca Film Festival in 2015, and featured a behind-the-scenes look at her recording sessions and collaboration with Britain’s hottest recording artists.  She will soon play Evillene, the Wicked Witch of the West, in NBC’s holiday production of “The Wiz Live!”  www.twitter.com/maryjblige

Since bursting on to the scene in 2011, platinum-selling recording artists Pentatonix have sold more than 2.2 million albums in the U.S. alone, won a Grammy Award, sold out venues worldwide, have amassed over 1.1 billion views on their YouTube channel with more than 9.3 million subscribers and appeared in the feature film “Pitch Perfect 2.” Their self-titled album debuted at #1 on the Billboard Top 200 and Current Albums Chart. The first single, “Can’t Sleep Love” has over 13 million views on YouTube. The group recently released an enhanced deluxe version of their platinum-selling holiday album, “That’s Christmas to Me.” The 2014 album sold more than 1.2 million copies in the U.S. and became the fourth best-selling album of 2014. All seven of their releases have peaked within the top five on Billboard’s Digital Albums Chart with six of those releases reaching the Top 10 or higher on the Billboard Top 200 Albums Chart. Most recently, the group received two gold certifications for their Daft Punk medley and cover of Imagine Dragons’ “Radioactive,” featuring Lindsey Stirling. The group released their very first documentary, “On My Way Home,” which follows the quintet on their sold out 2015 North American tour. Pentatonix features lead vocalists Scott Hoying, Kirstin Maldonado, Mitch Grassi, vocal bass Avi Kaplan and beatboxer Kevin “K.O.” Olusola. www.twitter.com/PTXofficial

Known for their rich history, unrivaled talent, strength, dynamism, precision and athleticism, the Rockettes have become one of the nation’s most beloved icons. From appearances ranging from “America’s Got Talent,” “Project Runway,” “Dancing with the Stars,” The Times Square New Year’s Eve Ball drop with Mayor Bloomberg to Presidential inaugurations and numerous Super Bowl appearances they have entertained millions with their precision choreography. As the stars of the annual “Radio City Christmas Spectacular,” running now through January 3, the Rockettes will also star in the upcoming production, the “Rockettes New York Spectacular,” opening in June at Radio City Music Hall. www.twitter.com/Rockettes

Composer, singer, author, actor, and activist, Sting has earned 16 Grammy Awards, a Golden Globe, an Emmy, three Oscar nominations and has sold close to 100 million albums from his combined work with The Police and as a solo artist. He is a member of both the Rock and Roll Hall of Fame and the Songwriters Hall of Fame, and received the Kennedy Center Honors in December 2014. Sting has appeared in more than 15 films and authored two books, including the New York Times best-selling memoir, “Broken Music.” His fourteenth solo album is inspired by the story of “The Last Ship,” his acclaimed Broadway musical for which he composed the music and lyrics and received a Tony Award nomination for Best Original Score.  “The Last Ship,” named Best Musical of 2014 by USA Today, draws upon his memories of the shipbuilding community of Wallsend in the North East of England.  His support for human rights organizations such as the Rainforest Fund, co-founded with his wife Trudie Styler in 1989, mirrors his art in its universal outreach. www.sting.com

For more information on “Christmas in Rockefeller Center,” visit http://www.nbc.com/christmas-in-rockefeller-center and the NBC Universal Media Village website at www.nbcumv.com.