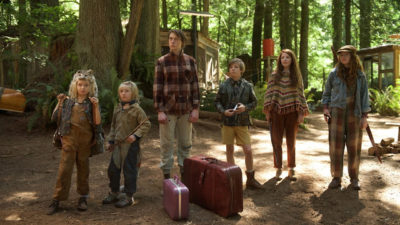 Ben Cash is raising his family to a Platonian ideal. In the forest of Oregon, they live off the land – growing their own fruits and vegetables; hunting their own meat, and learning art, science and philosophy.

When a tragedy forces them to enter the ‘real world,’ things get dicey.

We meet the family in a deer hunt that is actually a coming of age ritual for eldest son, Bodevan (George McKay). Following the hunt and slaughter of the deer, the family returns to its little compound to continue their day – which consists of training and education before singing and dancing around a campfire (the compound has no electricity, running water or most of the comforts of modern life).

Under Ben’s (Viggo Mortensen) tutelage, his kids are tough, self-reliant and self-aware in their natural state. It’s when Leslie (Trin Miller), the family matriarch, dies that they have to face the real world – and learn that things are very different (not necessarily better) than the life they’re used to.

When they decide to go to Leslie’s funeral – despite her father, Jack’s (Frank Langella), warning that he’ll have Ben arrested – suddenly they’re faced with meeting family who are living totally different ways and possessed of very different ideas.

A stopover in a trailer camp introduces Bo to a girl, and he learns just how much he doesn’t know about socialization. 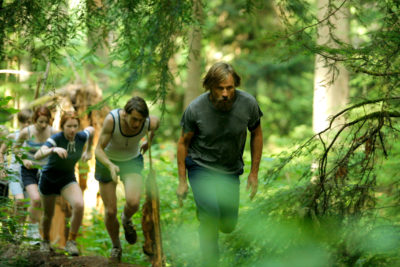 A one-night sleepover at Ben’s sister’s home introduces the kids to video games and family dysfunction of the suburban kind. Katherine Hahn, so hilarious in Bad Moms, is poignant as Harper, the sister who gets upset when Ben talks to her family the same, blunt, professorial way he talks to his own kids.

Steve Zahn, as Harper’s conciliatory husband, Dave, is wonderfully poignant in the sequence and steals it from Hahn and Mortensen.

A debate over education plays out in Ben’s favor when his youngest, Zaja (Shree Crooks) not only knows what the Bill of Rights is, but can explain without resorting to rote recitation (which she can also do) – unlike Harper’s boys, who have no clue.

When they crash the funeral – looking like a cadre of hippies in dress up – Jack forces Ben to leave. Ben is incensed at Jack’s refusal to honor his daughter’s wishes as set out in her Last Will and Testament.

Jack is very much of the world that Ben and Leslie abhorred – he’s wealthy and imperious and willing to use his influence to try to take Ben’s children from him. For him, wealth is power and in ‘the real world’ that matters more than his daughter’s wishes. 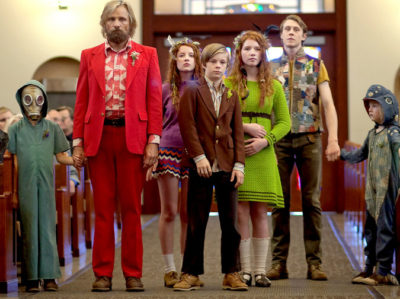 When Ben’s daughter Vespyr (Annelise Basso) is injured during an ill-conceived caper (don’t ask – you have to see it to understand), Ben falls apart – to the point where he seems ready to give in to Jack’s entreaties to leave the kids with their grandparents (Ann Dowd plays Jack’s wife, Abigail).

As Captain Fantastic progresses, the events become predictable, but it’s the moments between the predicable events that give the film its worth.

Ben’s kids, from oldest to youngest, can take ideas and discuss them and work through them for themselves. The film allows them to do this throughout and it’s bracing.

Written and directed by Matt Ross (best known as Silicon Valley’s Gavin Belson), Captain Fantastic is a film that has heart and intelligence but lacks in plot. What makes it work – besides the terrific cinematography – is the characters and their personal journeys inside those predictable events.

It doesn’t really matter if we know the beats of the plot; the music is in the ideas that pop up for examination by the kids – and the way they actually respond to them as individuals.

Captain Fantastic winds up being thoughtful and entertaining – just not in the ways we usually expect.