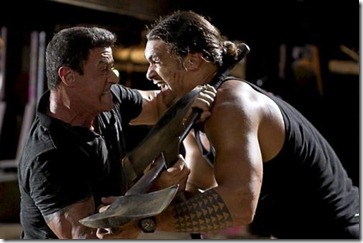 After the fun The Last Stand flopped big time, we get another 80s-style action flick with a sixty-something lead that is darker, nastier and possibly more stylish – but not quite as much fun.

Bullet to the Head pairs second-rate hitman Jimmy Bobo (Sylvester Stallone) with a Korean-American cop (Sung Kang) in a slick – as in both visceral and sleekly made – revenge flick that goes hard for style and much less so for smarts. Directed by Walter Hill (The Warriors, 48 Hours), it’s an entertaining melange of action movie tropes.

After successfully pulling off a hit, Jimmy Bobo and his partner, Louis Blanchard (Jon Ceda) are having a drink in a local bar. When Jimmy heads to the men’s room, Louis gets dispatched by a hulking killer named Keegan (Jason Momoa) – who tries for Jimmy buts doesn’t succeed.

The man Jimmy and Louis killed was the ex-partner of DC cop Taylor Kwon, and a dirty cop who got himself killed because he tried to blackmail Robert Nkomo Morel (Adewale Akkinouye-Agbaje), an African crook who was masterminding a plan to tear down the slums of Crescent City (given a jazz funeral procession seen early on, a stand-in for New Orleans) and replace it with luxury condominiums.

Take a couple of guys trying to seek vengeance – one white, one not; one a killer, one a cop; both avenging a partner/ex-partner – toss in three or four levels of criminal bureaucracy; add in a kidnapping to give the bad guys an edge (in this case, the gorgeous woman, played by Fairly Legal’s Sarah Shahi, is Stallone’s daughter – not his girlfriend) and the traditional double and/or triplecross, and you have Bullet to the Head. In sort, there’s nothing new here.

Hill establishes the film’s high style right from the beginning, as the rumble of a train clacking along the track becomes the rhythm track of Hans Zimmer’s opening theme. It’s slick, seamless and energetic – as is the entire movie.

I can see more high-minded critics disemboweling Bullet to the Head, but taken for what it is – an 80s action flick with an odd couple of protagonists (one of whom was an action hero in the 80s) – and nothing more, it’s a lot of nasty fun. It’ll also probably tank like The Last Stand did. That’s a shame.