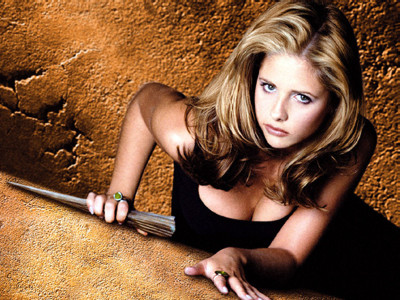 Dawson’s Creek and Buffy the Vampire Slayer have a new home on ABC Family. Teen icons Dawson Leery and Buffy Summers make their debuts of the network on Monday June 22nd.

Fans can vote on their favorite episodes which ABC Family will then use to kick off the series’ starts on the network. Follow the jump for premiere times and further details.

Burbank, CA (June 9th, 2015) – What do an aspiring filmmaker and a vampire slayer have in common? Not only are they two teens trying to navigate their way in the world, but both are making their ABC Family debut on Monday, June 22nd, 2015  at 12:00PM ET/PT and 5:00PM ET/PT, respectively.

Before Dawson, Buffy and all their friends make their first network appearance, fans will have the opportunity to visit http://abcfpoll.com/ and vote for their favorite “Dawson’s Creek” and “Buffy the Vampire Slayer” episodes to kick off each series’ respective runs. The ten episodes chosen by the fans will air during “Fan Favorite Week,” beginning on Monday, June 22nd at 12:00pm. Should “The Longest Day,” that game-changing episode when Joey and Pacey tried to tell Dawson about their romance, make the cut? Or what about “Becoming – Part Two,” when Spike strikes an unholy alliance with Buffy in order to keep Angel from destroying the world?  Now’s the chance for viewers to speak up and be an active part of ABC Family’s programming!

Then starting Monday, June 29th, both shows air from the beginning with “Dawson’s Creek” at 12:00 – 1:00 p.m. ET/PT and “Buffy the Vampire Slayer” at 5:00pm-6:00pm ET/PT. Dedicated fans who tuned in for the shows’ original runs can relive and debate the Dawson/Joey/Pacey and Angel/Buffy/Spike love triangles all over again, or join their favorite characters on a trip down memory lane as they tackle the trials and tribulations of adolescence – some without the added burden of being a vampire slayer. For those that missed each series the first time around, ABC Family offers the perfect chance to tune-in and fall in love with the characters and storylines that made pop culture history.

“Dawson’s Creek” premiered in 1998 and followed a tight-knit group of friends in a small Massachusetts town through high-school, college and beyond. Over its six seasons, the series told poignant stories of teenagers growing up in a rapidly changing world while tackling important, universal issues such as friendship, love, loss, homosexuality and betrayal. A production of Sony Pictures Television, “Dawson’s Creek” was created by Kevin Williamson. Paul Stupin, Greg Prange and Tom Kapinos served as executive producers.

A one-hour, comedy-action drama “Buffy the Vampire Slayer” originally premiered in 1997. The series chronicles the adventures of “The Chosen One” Buffy Summers, a sixteen-year-old girl who yearns to be normal, despite being gifted with the strength and skill to hunt vampires. Produced by 20th Century Fox Television, the series was created and executive produced by Joss Whedon.