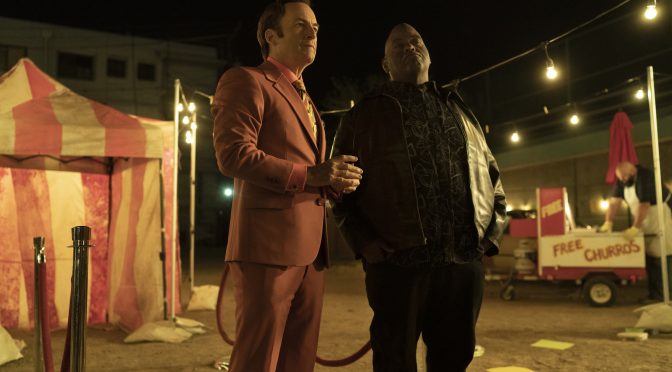 “The world of Breaking Bad remains iconic and AMC is the destination for all of its brilliant stories – from the place where it all began, Breaking Bad, to the gripping tale of  Jesse Pinkman’s continued journey in the feature film El Camino and the next chapter of ‘criminal’ attorney Jimmy McGill’s transformation in Better Call Saul’s upcoming fifth season,” said Sarah Barnett, President of AMC Networks’ Entertainment Group and AMC Studios.  “We are beyond proud to be the home for Vince Gilligan and Peter Gould’s incredible vision and are endlessly in awe of the insanely talented actors that bring the vision to life.”

Breaking Bad, which first premiered on AMC in 2008, follows the story of a desperate man who turns to a life of crime to secure his family’s financial future. Over its five-season run, the series garnered 16 Primetime Emmy® Awards, including the 2014 and 2013 Emmy® for Outstanding Drama Series; two Golden Globe® Awards, two Peabodys and was named to the American Film Institute’s (AFI) list of the “Top 10 Programs of the Year” in 2008, 2010, 2011, 2012, 2013 and 2014, among other accolades. The series stars four-time Emmy®-winner Bryan Cranston; three-time Emmy®-winner Aaron Paul; two-time Emmy®-winner Anna Gunn; Dean Norris; Betsy Brandt; RJ Mitte, Jonathan Banks and Bob Odenkirk. Breaking Bad is executive produced by showrunner Vince Gilligan, Mark Johnson (Gran Via) and Michelle MacLaren and produced by Sony Pictures Television.

El Camino: A Breaking Bad Movie reunites fans with Jesse Pinkman (Emmy®-winner Aaron Paul).  In the wake of his dramatic escape from captivity, Jesse must come to terms with his past in order to forge some kind of future.  This gripping thriller is written and directed by Vince Gilligan and produced by Mark Johnson, Melissa Bernstein, Charles Newirth, Diane Mercer, Gilligan and Paul, in association with Sony Pictures Television. It premiered with a special presentation in select theaters across the country and on Netflix on October 11.