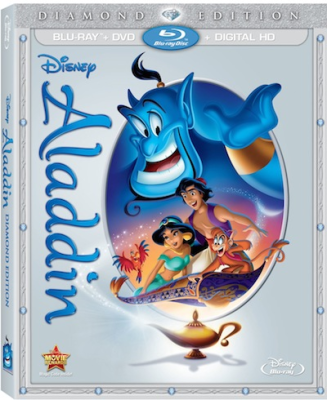 Written and directed Ron Clements and John Musker Disney’s Aladdin came out in 1992 during a time when Disney was in desperate need of a hit film and saved the from going under. Well, that’s hyperbole, but it is largely credited with rejuvenating the film and animation departments. I’ve never been a fan of the music and the few clips that I’ve seen of Robin Williams as the Genie were cringe inducing. Robin Williams unleashed was never a good thing. So this is my first experience with the film.

The voice acting was over the top and distracting, especially Robin Williams and Gilbert Gottfried.  Other than the classic song A Whole New World, the soundtrack is surprisingly terrible and not up to other Disney Classics like The Lion King, the story kind of shallow – which is surprising considering Disney stories are usually fairly deep and once again where the hell was the mother? Why is it Disney Animation continues to treat mothers like crap. I mean where the hell do little Prince and Princess come from? Jesus.

I miss the days of hand drawn animation, but the color pallet in this world was all just bright orange, red, and various shades of yellow made everything look overly shiny and at times blinding.  The only scene that had any heart was when Aladdin (Scott Weinger) takes  Jasmin (Linda Larkin) on the magic carpet ride.  The entire movie didn’t have a real core to it. It was a vehicle for the celebrity actors to ham it up.

Fans of Aladdin probably won’t be disappointed in this release. Disney gets bonus points for not making this letter boxed and it’s not in 4:3 either, the 1:85:1 aspect ratio filled up the screen and looked gorgeous on my 60-inch HDTV. I wish all Movies did this, I can’t tell you how sick I am of letterboxing and watching 4:3 HD on a 60-inch-wide-screen TV. It drives me nuts! Audio comes in English 7.1 DTS-HDMA and French and Spanish 5.1 Dolby Digital.

As always Disney includes a Movies Anywhere digital copy, so you can watch your movie on any device and the iTunes version includes all the Blu-ray extras as well.  The extras feel a little light for this release, there’s a nice featurette about the creation of the Aladdin Broadway Musical, a short look at all of Robin Williams Impressions, some music videos including two different versions of A Whole New World, a couple of deleted scenes and a nice featurette Directors John Musker & Ron Clements talk about their long partnership.

I know I’m in the minority in hating on Aladdin, so this Blu-ray release isn’t for me. However, if you are a fan there’s no reason for you not to pick it up, as always Disney does a loving job on the picture and audio quality of this release.