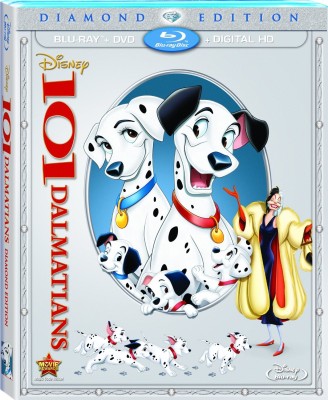 Featuring long sharp, painted brush strokes the animation style in this film was certainly unique for it’s time and groundbreaking for its time. Clyde Geronimi, Hamilton Luske (as Hamilton S. Luske) and Wolfgang Reitherman  team up to bring one of Disney’s most memorable villains Cruella De Vil (Betty Lou Gerson) to life. She’s so evil she’s gets her own song, now that’s evil!

Cruella is in love with her fur coats and sees a prize in her old college friend’s litter of puppies. Pongo the Dog and his master Roger Radcliffe go on a desperate hunt for the missing pups. In one of the movies more cute moments Congo sends out the Twilight Bark – an alarm that gets every animal in london involved in the hunt for the missing pups.

I found most of the voice cast that included Rod Taylor (Pongo), J. Pat O’Malley (Colonel/Jasper) and others to be slightly off. They didn’t fit their characters at all. Betty Lou Gerson evil cackles brought Cruella to devilish life.

Formatted in it’s original 1:33:1 aspect ratio the animation looks clean, but doesn’t hold up all that well. It looks really dated, but it still fits the jazzy tone of the story and it’s London setting. I watched the film with Disney’s proprietary DisneyView mode activated. This mode replaces the black bars with dynamic artwork that is supposedly designed to blend in with the picture on the on the screen, but the constant color changes are distracting.

The Dolby audio mix was flawless, the tinkle of the jazz piano transports you to another time and place.

I’m really loving Disney’s new DisneyAnywhere digital copy program. It’s nice to be able to enter the code in one place and have it work with all your favorite stores. Not only that but it includes all the extras from the disk as a nice added bonus. Unfortunately, or fortunately, I haven’t decided yet – my digital code included the 1996 Live Action version of 101 Dalmatians starring Glenn Close and not the classic. I prefer the live action version, so it was an mistake that worked in my favor.

Fans of this animated classic won’t be disappointed with this release. It packed with a nice assortment of classic and modern extras for Disney fans young and old. However, I’m not a fan of this movie, it’s a little too old fashion for my sensibilities.