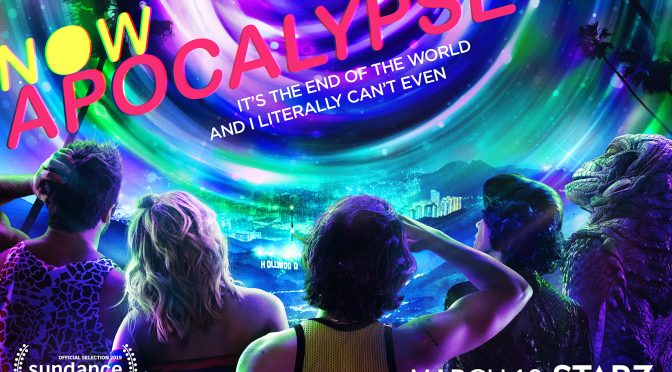 Greg Araki’s Now Apocalypse – a stylized romance/sex/end of the world comedy series – will be available for fans (and anyone who wants something genuinely different to watch) to binge as Starz makes the entire first season available on all Starz non-linear platforms today.

NO, YOU’RE NOT HIGH…

“Sure to be a cult favorite” – The Hollywood Reporter

“’Now Apocalypse’ Is a Masterpiece of Comic Kink” – Paste Magazine

Santa Monica, Calif., March 22, 2019 – For all the fans craving a binge, Starz, a Lionsgate company (NYSE: LGF.A, LGF.B), is releasing the full 10-episode premiere season of the exhilarating and critically acclaimed new Starz Original Series “Now Apocalypse.” An Official Selection of Sundance Film Festival 2019 and CANNESERIES Festival 2019, “Now Apocalypse” has been made available to binge watch across all STARZ non-linear platforms, including the STARZ app, STARZ On-Demand and STARZPLAY in the U.S., U.K. and Canada on Friday, March 22, 2019 starting at 12 AM ET. Starz also made the series premiere episode available to watch for free in its entirety online on Starz.com, STARZ YouTube channel, Reddit and Pride Media platforms (Pride.com, OUT.com and Advocate.com).

“Gregg Araki has created a vibrant world filled with relatable characters and relationship storylines and we have found that many fans want to consume this content as soon as possible,” said Carmi Zlotnik, President of Programming for Starz. “We are giving this audience every opportunity to dive into the crazy world of ‘Now Apocalypse’ and ride the roller coaster of the season at their own pace.”

“Now Apocalypse” stars Avan Jogia (“Tut,” “Twisted”) as Ulysses, who is struggling to figure out his life in the surreal and bewildering city of Los Angeles. Kelli Berglund (“Lab Rats,” “Fosse/Verdon”) stars as Carly, Beau Mirchoff (“Awkward,” “The Fosters”) as Ford, and Roxane Mesquida (Kaboom, “Gossip Girl”) as Severine, all of whom are on quests pursuing love, sex and fame. Between sexual and romantic dating-app adventures, Ulysses grows increasingly troubled as foreboding, premonitory dreams make him wonder if some kind of dark and monstrous conspiracy is going on — or if he is just smoking too much weed.

“Now Apocalypse” will continue to air weekly at 9 PM ET/PT on STARZ airing every Sunday night through May 12, 2019.

For more information on “Now Apocalypse,” as well as access to press materials and show assets, please visit the STARZ Media Room, which is compatible with iPad devices: https://mediaroom.starz.com.