Hiro Hamada (voiced by Ryan Potter) graduated high school at 13 but has been slacking off since then, using his genius for robotics to hustle opponents for a quick buck in robot fighting. He idolizes his older brother, Tadashi (Daniel Henney), who also has a gift for robotics – and who occasionally bails him out when his robot fighting hustle gets him in trouble. The two live with their restaurant owner aunt, Cass (Maya Rudolph), about her restaurant.

One night Tadashi takes Hiro to his ‘nerd school’ and the work he and his fellow students are doing blows Hiro away and he decides he must go to this school – leading to an invention that impresses head of the school, Professor Robert Callahan (James Cromwell). Callahan invites him to take part in a science fair that could gain him admission.

Hiro’s invention impresses Callahan, but also Alaister Krei (Alan Tudyk), a low-rent Tony Stark who made big bucks exploiting other people’s inventions – but cutting corners wherever he thought it might jack up his profits. Shortly after Hiro chooses admission to Callahan’s school over Krei’s big mony, the hall erupts in flame – and when Tadashi goes back into the building to save Callahan, he doesn’t make it.

Hiro goes into a funk – staying in his room, not eating and generally avoiding everything. Even overtures from Tadashi’s fellow students – Go Go (Jamie Chung), Wasabi (Damon Wayans Jr.), Honey Lemon (Genesis Rodriguez) and their non-scientist friend Fred (T.J. Miller) – fall on deaf ears. Then, when he drops something on his foot, Tadashi’s ultimate creation, huggable personal healthcare robot Baymax (Scott Adsit), he begins to come back to the real world – a process hastened by Aunt Cass inviting Tadashi’s friends to visit. 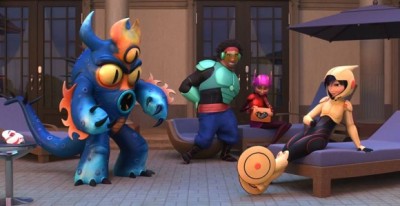 A chance observation by Baymax puts Hiro in the way of a kabuki-masked villain who has taken Hiro’s invention – though lost in the fire – and is using it for nefarious purposes. From there, the action gets cranked up as Hiro tries to find a way to retrieve his invention and stop the man in the kabuki mask.

He drafts his brother’s friends and sets to work on upgrades for Baymax that turn him from a robot nurse into a fighting machine – in spite of the robot’s insistence that this is not a great idea.

Big Hero 6 is set in the city of San Fransokyo – a place that combines elements of American and Japanese design to create something fresh and interesting – and is based on the Marvel title that was developed by Man of Action, the creative team behind Ben 10. As an extremely obscure Marvel title, it allows Disney Animation to play in a Marvel Comics setting without having the intricate continuity of the Marvel Universe (or the Marvel Cinematic Universe, for that matter) place constraints on what they are doing.

It’s worth mentioning that there is a hilarious cameo for Marvel fans as well as some cool references to other sci-fi projects – at least one of which factors into the events of the movie in a major way.

For the third straight time, Disney animation has produced a movie that surpasses the latest efforts of Pixar. Big Hero 6 is a movie that deals with life, loss and family and does so in the guise of a superhero origin movie. It says that you can choose your family; that you can be an individual even as you work as a team, and that intelligence and heart are great by themselves but even better when combined.

Big Hero 6’s 95 minutes zip by and, yes, there is a tag at the end of the film for those who are willing to sit through the credits. It’s important enough to be worth your time.