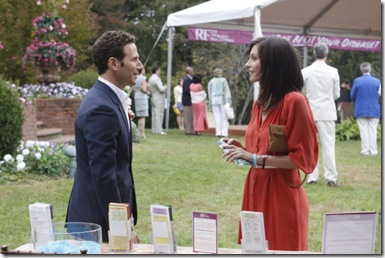 The second half of Royal Pains [USA, Thursday, 9/8C] has brought big changes into the lives of HankMed’s little family. Hank [Mark Feuerstein] has re-connected with Jill [Jill Flint]; Evan [Paulo Costanzo] has found the love of his life in Paige [Brooke D’Orsay ]; Divya [Reshma Shetty] and Raj’s [Rupak Ginn] wedding is almost upon them, and Eddie [Henry Winkler] is facing the possibility of going to prison. In the second season finale, Listen to the Music, everything comes to a head.

Listen to the Music starts of a gallop: Divya and Raj are taking tango lessons and trying to cope with her revelation, last week, that she kissed a patient; Jill has been approached by Ben Richardson [Will chase] to set up a fleet of mobile medical clinics in South America, and Evan, Hank and Eddie are heading into court. This week’s medical mysteries involve a possible misdiagnosis of MS for Ben, and a possible case of pneumonia for Divya and Raj’s tango instructor, Niko [Gilles Marini].

Over the course of the last several weeks, the biggest question has been whether Eddie would be healthy enough to be sent to jail – and then if he would actually go, or abscond to some idyllic isle courtesy of Boris [Campbell Scott]. This is the ep where that all shakes down, and it’s an interesting journey for the Lawsons. Feuerstein, Costanzo and Winkler have developed into a thoroughly believable family.

The second biggest question was whether Divya would actually go through with her arranged marriage to Raj – a decision made all the more difficult because he’s a genuinely good person and she does really like him. 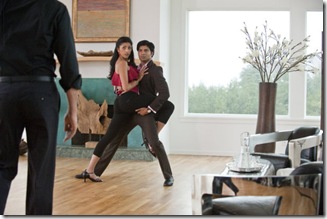 Evan’s budding relationship with Paige, who comes from a fabulously wealthy family, could have been turned into a riff on Evan’s track record of always looking for an angel [could he be interested in her only for her money? What one earth does she see in him?], but instead resolved itself into the real thing – which probably surprised Evan even more than it did Hank.

By continuing to build and develop the show’s characters, Royal Pains has evolved into a series that is the best of what USA Network’s blue sky filter can provide: characters who are fun to hang with; relationships that feel like the real thing, and medical mysteries that might not stump House, but are always interesting and fit well into the show’s concierge medicine premise.

It’s difficult to single out any cast member for praise because they are a terrific ensemble. That said, the addition of Henry Winkler in the recurring role of Eddie Lawson has inspired everyone from the writers and cast to the entire crew. As great looking as the show was last season, it is even more beautiful now.

Lest you think everything is roses, though – and I can’t really say much about the ep because it somehow manages to include answers to all of the big questions mentioned above, there is a cliffhanger of sorts. And a final tweak to one of the ep’s medical mysteries that adds a bit of suspense to the finale – though, overall, Listen to the Music is satisfying experience.

If the screener hadn’t been a rough cut [no opening credits], I would be extolling the virtues of the writer [possibly creator Andrew Lenchewski…] and the director [not even a guess] by name. All I can say is that Listen to the Music [the first rule of tango, apparently] is one of the show’s smartest and most heartfelt eps, to date.

Photos by Heidi Gutman and David Giesbrecht/Courtesy of USA Network