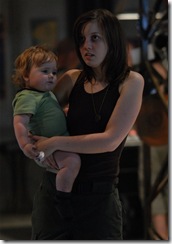 Civil unrest; civil war; a potential for mutiny and character death – this week’s Battlestar Galactica episode, The Ties That Bind, is picking up the pace. Outside of Cavil’s response to last week’s little fracas with the Centurions, did anyone see any of this happening? Spoilers follow.

Key events: President Roslin is helping Admiral Adama keep the nature of the Demetrius’ mission secret –but not without some rancor [though a later scene has Adama reading her a mystery as she has medical tests]; Lee Adama is now the Caprica representative on The Quorum of the Twelve; Tom Zarek [of all people] nominated Lee for the position; Tory came on to Chief Tyrol – and Cally saw it; Lee challenged the President on the matter of a proposed judicial system that put the fleet’s justice system, for all intents and purposes, solely in her hands – but only after she tried to shut him down on another matter; Cally found a note for her husband about a meeting and followed him – and discovered that he, Tory and Tigh were “skin jobs”; Cavil’s group surrounded the others’ base stars and opened fire – after pretending to concede to their wishes to resurrect the D’Anna model; Starbuck’s crew, bored and frustrated, demanded to know what the frak she was doing – and got shut down; Cally took Nicky to a Viper bay and prepared to open the airlock when Tory intercepted her; Tory talked her into giving her Nicky then knocked her out; Cally awoke to see Tory activate the airlock – and was spaced. The episode’s final scene, with the admiral informing him of his wife’s death [will it be chalked up to some kind of clinical depression, or will Tory tell Tyrol she did it to free him?]. The only thing missing from this ep was the Messiah Baltar and his harem!

Yup. Things are really ramping up on Battlestar Galactica. The episode title might well have read “Untying the Ties That Bind.”

Although Lee and his father seem to have gotten over their latest episode of friction, the Roslin/Adama relationship is definitely fraying; even before Callie saw Tory come on to Tyrol, their relationship wasn’t that great; Tory seems to experiencing everything more fully – sex, drinking, food – and has developed an appetite that leads to trouble – severely stressing whatever ties that bind The Four [and seriously ticking off Tigh]; whatever relationship existed between Roslin and Lee might have been destroyed when he defended Baltar [as Zarek noted], but it has almost certainly been destroyed by Lee’s questions in the Quorum meeting this week; Anders’ marriage to Starbuck has been exposed as being a sham and is reduced to the purely physical – earning Starbuck another potential enemy; and the tie between the six working models of Cylons has been shattered irrevocably with the ambush of Six’s group by Cavil’s. 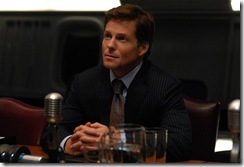 Once again, there’s so much going on – and so much of it is important – that it’s hard to believe that the episode doesn’t feel rushed, or over crowded. Michael Taylor [Sine Qua Non, Taking a Break From All Your Worries] comes up with his best ep yet. He manages to work in small details – like Adama reading Roslin a book entitled Love and Bullets [“It started like it always did. With a body.”], or Zarek’s explanation to Lee for why he recommended him for appointment to the Quorum of the Twelve – and yet doesn’t lose that sense of intimacy during more spectacular moments – like Six’s realization that Cavil was about to ambush her group. One further thought: considering Zarek’s motives for bringing Lee into the Quorum, and Lee’s first few efforts there, is it possible that President roslin might be soon be facing a mutiny of her own?

Moments that stood out: Adam reading to Roslin; Cally’s visit to Doc Cottle; Tigh’s explosion at Tory and Tyrol; the frustrated look on Gaeta’s face on the Demetrius; Tory telling Cally, “We’re not evil” and then knocking her out and waiting for her to wake up before spacing her [and this was also the first time we got to see that The Four have that Cylon strength]; the silence of the final scene as Adama talks to Tyrol. 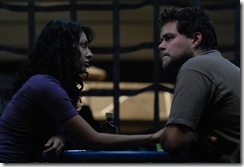 Director Michael Nankin [Scar, Maelstrom] does a marvelous job of making sure that all the ep’s quiet moments feel real and the big ones [like the ambush and Cally’s spacing] are given the appropriate gravitas. The Ties That Bind is the first ep of the season that really has no dead spots.

As of The Ties That Bind, it would appear that the ties that bind friends, families and even governments are beginning to disintegrate on Battlestar Galactica. The question is, will they continue to fray, or will they be reconfigured in some hitherto unexpected way?

Line of the week – Cavil: “We’re machines dear, remember? We don’t have souls.”

It looks like the BSG creative team has just shifted into high. Hang on!