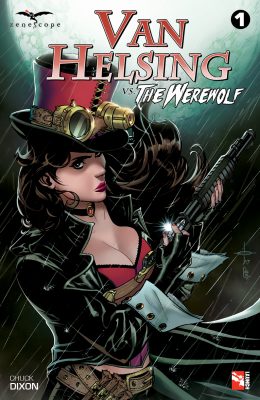 Chuck Dixon – creator of Batman’s foe Bane – will be writing Zenescope’s next Van Helsing miniseries, Van Helsing vs. The Werewolf.

Liesel Van Helsing, daughter of famed vampire hunter Abraham Van Helsing and the world’s greatest steampunk vampire hunter must travel the globe to find The Sword of Heaven – the only weapon that might possibly stop one of the most dangerous enemies she has ever faced.

Van Helsing vs. The Werewolf #1 is set to be in comic stores everywhere July 5th.  The final order cutoff deadline for retailers is June 12th.

Liesel Van Helsing, daughter of famed vampire hunter Abraham Van Helsing, faces a terrifying new threat in Zenescope’s fifth installment of the comic book series that features one of its most popular characters. From a brutal werewolf attack on a high mountain ledge to an epic kung-fu brawl at the airport to a battle with vampires at 35,000 feet, the world’s greatest steampunk vampire hunter ventures across the globe in search of the Sword of Heaven, an ancient weapon that may be Van Helsing’s only chance at stopping one of the most dangerous enemies she has ever faced!

“Between the comic book and the new SyFy channel series that was inspired by her, Van Helsing has quickly grown into one of our most beloved characters.” said Zenescope’s Ralph Tedesco. “And we’re thrilled to have a writer of Chuck’s immense talent continuing her story with us.”

Van Helsing vs. The Werewolf #1 is set to be in comic stores everywhere July 5th.  The final order cutoff deadline for retailers is June 12th.

Praise for Van Helsing
“Zenescope does it again: this series captures horrors and heroics perfectly.”
– SciFiPulse

“To put it simply: this is one of the best-looking books at your local shop.”
– SnapPow.com

“The comic is truly an engaging piece that brings together supernatural elements with those of science fiction, ensuring that lovers of either genre will be pleased.”
– Project-Nerd

ZENESCOPE
Joe Brusha and Ralph Tedesco started out writing screenplays together about fifteen years ago but the two eventually came up with the idea that evolved into Zenescope Entertainment. The company was founded in 2005 and has become one of the most recognized independent comic book and graphic novel publishers in the world. Ralph and Joe’s edgy and non-traditional brand of story-telling sets them apart from the pack. Zenescope’s Grimm Fairy Tales and subsequent spinoff series such as Oz, Wonderland, Neverland and Robyn Hood, which re-imagine classic fables, are some of the best-selling and longest-running original independent comic books on shelves today. Zenescope publishes and develops both original and licensed material and has worked with dozens of clients that include Discovery Channel, History Channel, CBS, Lionsgate TV, Mandalay Vision, New Line Cinema, Titmouse Studios and many others.

Zenescope Entertainment has brought an exciting new feel to comics and are proud to have such a devoted fan base coming along for the ride.