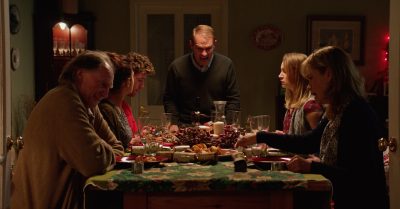 A family Christmas goes from casual racism to terror when the family home is surrounded by what appears to be a mysterious black sheath covering the entire building in Await Further Instructions.

Nick (Sam Gittens, EastEnders) and his girlfriend Annji (Neerja Naik, Casualty) arrive at his family’s home to a reaction that ranges from tolerant to outright bigotry – Annji is an Indian woman and Nick’s grandfather (David Bradley, Game of Thrones, Broadchurch) makes Archie Bunker look like a tolerant guy.

To some extent, all of Nick’s family – mom Beth (Abigail Cruttenden, the Sharpe TV movies), dad Tony (Grant Masters, The Bill, Hollyoaks), very pregnant sister Kate (Holly Weston, Hollyoaks, The Collection) and her fiancé Scott (Kris Saddler) – display some kind of racism – from Beth’s welcoming the couple but not looking at Annji any more than absolutely necessary, to Kate’s use of racial stereotyping, to granddad’s active hostility and use of racial epithets. 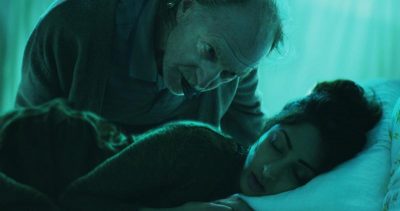 Even without the events that follow, this would be a very difficult Christmas, but when the family home is cut off from everything else – and the television broadcasts the message ‘Stay indoors and await further instructions,’ every tension is amplified.

Written by Gavin Williams and Johnny Kevorkian (The Disappeared), Await Further Instructions uses isolation to compound problems that already exist within this family dynamic (there’s a reason why Nick hasn’t visited or called in years).

Following the message to await further instructions, the television begins flashing a series of instructions that start out simply (your clothes are contaminated; strip and wash yourselves with bleach; one of you is infected, isolate them) and escalate quickly. 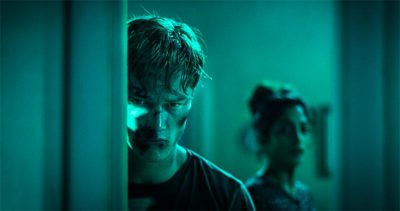 Before long, Nick and Annji are questioning whether the messages are really the government’s emergency broadcast system but when they try to find a way out, they are opposed by Tony – who takes a harsh, military approach to dealing with the situation.
Then people begin to die…

Set entirely within the walls of this family’s home (except for two very brief sequences), Await Further Instructions works as a study in psychological horror as the family tries to figure out what’s going on and whether they should be doing what the TV says.
Is this a terrorist attack? An invasion? Aliens?

Who knows – but every time Nick tries to figure something out, he is thwarted by Tony and Scoot (whom Tony has persuaded to back him in all situations). 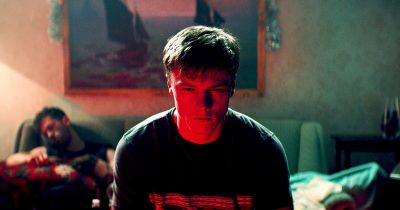 Annika Summerson’s cinematography and Richard Wells’ score amplify the claustrophobic atmosphere as the family splinters and becomes even more vulnerable.

Gittens, who reminds of the young Sean Bean, anchors the movie with a depth of sincerity that plays well against the more over the top performance of Masters – and complements the work of Cruttenden and Weston.

Naik’s Annji is a study in determination as she deals with the forms of racism that confront her – and remains the most grounded character in the movie.

Bradley is particularly venomous as Granddad – even more so than when he played Walder Frey on Game of Thrones. 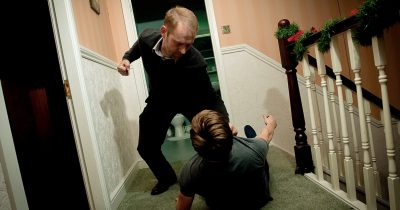 Masters, essentially, gets one tone to play as the ramrod straight father who thinks soldiering on is all about him setting a path and bullying everyone to stick to it – but he manages to play an interesting range within those constraints.

The revelation of what is really going on here is probably not as effective as Kevorkian might have liked, but up until then Await further Instructions is a very good little scary movie.

The final sequence also recovers from the less effective reveal to give darkly sweet finale.