Audible and DC are partnering for the first-ever audio production of Neil Gaiman’s The Sandman.

The Sandman will be directed by Dirk Maggs – with Gaiman narrating.

The first instalment of the multi-part drama series is set for release on Audible this summer. Check out the teaser below. 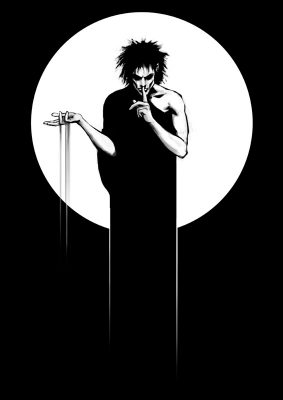 AUDIBLE AND DC ANNOUNCE THE FIRST-EVER AUDIO PRODUCTION OF THE SANDMAN, WRITTEN BY NEIL GAIMAN

NEWARK, NJ – March 4, 2020 – Audible Inc., the world’s largest producer and provider of spoken-word entertainment and audiobooks, today announced that New York Times best-selling comic book series, The Sandman, written by Neil Gaiman and published by DC, will be produced in audio for the first time, adapted and directed by Dirk Maggs. The first instalment of The Sandman, a multi-part Audible Original audio drama series, is set for release on Audible.ca, Summer 2020.

Check out the teaser here.

Audible’s exclusive audio adaptation will bring The Sandman’s epic, metaphysical fantasy to life in meticulously sound-designed, richly immersive audio. When an occultist attempts to capture the physical embodiment of Death in a bargain for eternal life, he instead mistakenly traps Death’s younger brother Morpheus, the King of Dreams. After his seventy-year imprisonment and eventual escape, Morpheus goes on a quest to reclaim his lost objects of power and rebuild his realm. From there, one of  the greatest and most successful series of graphic novels ever written begins. Celebrated globally for its vibrant blend of modern myth and dark fantasy – which seamlessly interweaves contemporary fiction, historical drama and legend – The Sandman follows Morpheus, and the people and places he’s affected, as he tries to mend the cosmic and human mistakes he’s made during his Endless existence.

“Almost 30 years ago, Dirk Maggs approached DC about adapting The Sandman into audio form. It didn’t happen (although it was how Dirk and I first crossed paths) and I’m glad it didn’t happen, because we are in a Golden Age of audio drama right now, and Dirk and I are much better at what we are doing,” said Neil Gaiman. He continued, “This is a rich audio adaptation of The Sandman Graphic Novels, brilliantly crafted by Dirk Maggs, with an all-star cast. I’ve loved being there to talk casting, there to read the scripts and offer occasional advice, and there in the studios, watching magic get made and recording the narration. I can’t wait until the world hears what we’ve done.”

Dave Blum, Editor-in-Chief of Audible Originals, commented: “Audible prides itself on creating and producing immersive and entertaining storytelling, and the exclusive audio production of Neil Gaiman’s legendary comic book series marks a thrilling addition to our original content offerings. We’re excited to join Neil and DC in bringing this extraordinary and beloved universe to Audible’s millions of listeners worldwide, for the very first time.”

“This audio iteration of The Sandman is huge in scope and ambition and based exclusively on Neil’s original notes and scripts for his iconic DC series. Our production dives deep into Neil’s imagination, as if he is writing these tales beside us, lifting out details and story elements few have been privy to until now,” shared Dirk Maggs. “Audio uniquely complements the comic book artists’ visual imagination and Neil’s creative brilliance, while our amazing cast and Jim Hannigan’s music add new emotional punch. This project’s three-decade incubation period has been worth every minute of the wait. It’s the very essence of Neil Gaiman’s Sandman.”

Steve Carsey, Senior Director of Original Content at Audible UK, said: “Of all the great comics and graphic novels I devoured throughout my teenage and early-adulthood, The Sandman has been by far the most influential and inspirational. It is a masterpiece. It instilled in me an appreciation of storytelling when I was younger. Now that I’m older the human condition feels even more fragile, complex and important through Neil’s imagination. This epic adaptation – and the chance to work with Neil himself – has been an honour.”

The Sandman is the latest in a series of best-in-class Audible Original audio dramas released by Audible in the recent months. Other highlights include Heads Will Roll, starring Kate McKinnon, Emily Lynne, and featuring Meryl Streep and Peter Dinklage; The X Files, starring Gillian Anderson and David Duchovny; Stan Lee’s Alliances: A Trick of Light, starring Yara Shahidi; and Jeff Wayne’s The War of The Worlds: The Musical Drama, starring Michael Sheen, Taron Egerton and Theo James.

The Sandman will be available to download exclusively on Audible.ca, Summer 2020 in English and will subsequently be released in French, German, Italian, and Spanish editions.