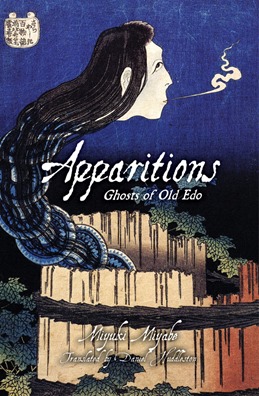 Apparitions: Ghosts of Old Edo is a collection of nine stories that range from vaguely disquieting to definitely unnerving to outright chilling. Author Miyuki Miyabe is among the first Asian horror writers whose writing is influenced by Western horror (Lovecraft is an influence) and it really shows. Her stories might be about Japanese people, settings and creatures, but they build feelings of disquiet and dread in ways that also invoke something more western.

It seems that everyone loves a good ghost story. Virtually every country in the world has some supernatural folklore and every country’s ghosts and other supernatural beings are different. In Japan, the collective descriptive catch-all is yokai, with oni usually being demons, devils, ogres or trolls – bust also invisible spirits.

Miyuki Miyabe spins tales of hauntings, weird killings and other supernatural events that are inspired by Japanese folklore and influenced by Western writers and movies. The nine stories included in Apparitions: Ghosts of Old Edo are as varied as any collection of Lovecraft or Richard Matheson – and as spine-tingling as any horror fan could ask for.

From the double suicides, the ‘tea towel shinji’ of A Drowsing Dream of Shinju to the unusual patrons of the employment agency in Ash Kagura; from the man who never entered into business arrangement with anyone his mother hadn’t approved (The Oni of the Adachi House) to the perfect employees of The Futon Storeroom, Miyabe creates situations that develop in strange ways and levels of weirdness and tension that operate on levels from the subtlest to the unexpectedly overt.

She tells these tales with a film director’s eye and a reporter’s clarity – each story given precisely what it needs to achieve its point and effect and not a word more. Her characters are acted upon by unseen forces, or unusual characters; her oni can be monstrous, or protect from more monstrous humans.

A dying woman tells her daughter-in-law a strange story; a young boy learns the truth about his parents. The range of Miyabe’s subjects is delightfully odd; her storytelling often deceptively gentle. Though she specializes in the quietly unnerving (The Plum Rains Fall), she is equally adept at twist endings (The Oni in the Autumn Rain) and shocks (A Woman’s Head). Her characters usually speak in a very polite, formal manner but each has a distinct voice – even the ones who are silent.

She has the ability to set a mood in a brisk, efficient manner without seeming either rushed, or mean-spirited. In The Futon Storeroom, she describes the late owners of a sake seller – all of whom had died well before their natural life expectancy:

‘Even so, there had been nothing particularly ominous or suspicious about the deaths of its previous six owners. Five of them had died peacefully, and one of them… had not. They had each passed on with such ease and tranquility that had they been able to fulfill their expected life spans, their lives would have been deemed blessed and full by those who knew them. They would simply climb into bed one night and never wake up. Morning would come and their families would try to wake them, only to realize they were dead’

Without doing a great deal, Miyabe sets up an odd situation by making it seem perfectly natural in every respect but one. The reader is hooked.

The translation, by Daniel Huddleston, must be first-rate – the fluidity and precision of Miyabe’s storytelling never feels forced and is rarely anything less than charming (even in its scariest moments).

Apparitions: Ghost Stories of Old Edo, like any really brilliant collections of supernatural tales, holds up well to rereading, too – I’ve read the book twice and found nuances in the second reading that maintained the level of experience I got for from my first time through. I would love to read more of Miyuki Miyabe’s writing. When a book can do that, it’s worth raving about.