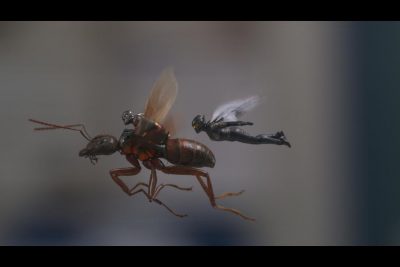 After all the end-of-half-the-living-beings-of-the-universe holy crap!@ness of Avengers: Infinity War, there are two aspects of Ant-Man and the Wasp that make it a refreshing change.

The stakes are Scott Lang’s freedom and the life of Janet Van Dyne (and, okay, tangentially, the life of the costumed ‘villain’ of the piece – but not the mundane villain of the piece). 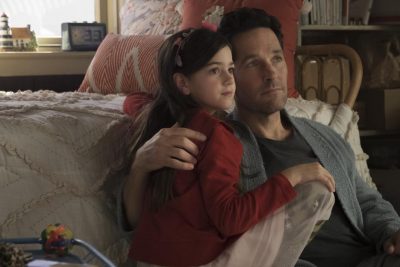 Also, Ant-Man and the Wasp reversed the drama/comedy ratio of most Marvel movies. Which is to say that it’s funnier (and more consistently so) that the Guardians of the Galaxy movies (and that’s funny!).

The movie opens with Scott Lang (Paul Rudd) on house arrest following the events of Captain America: Civil War – and entertaining his daughter, Cassie (Abby Ryder Fortson) with recreation of an ant hill (that seems to take up his whole house!) and a secret mission. 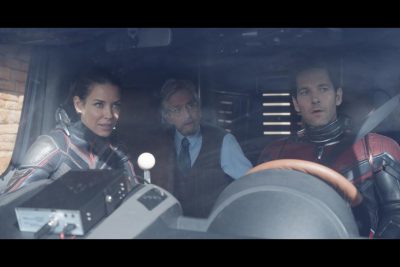 Meanwhile, Dr. Henry ‘Hank’ Pym (Michael Douglas) and his daughter Hope (Evangeline Lilley) are working on a ‘quantum tunnel’ to try to find Janet Van Dyne (Michelle Pfeiffer) and retrieve her from the quantum realm.

While playing with Cassie, Scott accidentally breaks through a fence with the leg that is home to a tracking device (to insure he remains at home), bringing FBI agent Jimmy Woo (Randall Park, Fresh off the Boat) to check on him. 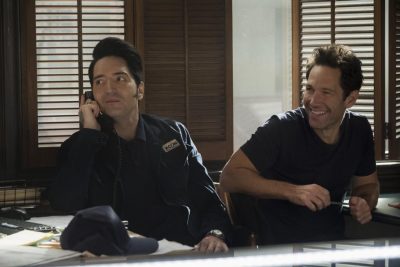 After quickly setting almost all the pieces on the board, the movie kicks into high gear with Scott having a dream about Janet – and leaving a message on Hank’s voicemail. Within minutes, his message is answered by a frantic Hope. His dream coincided with the activation of the quantum tunnel. 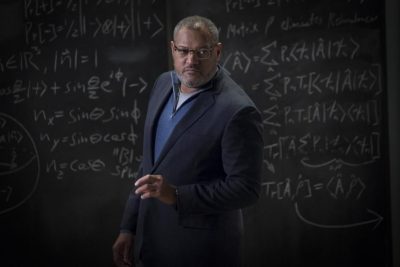 Shortly thereafter, we meet Bill Foster (Laurence Fishburne, The Matrix), a former partner of Hank’s, who might be able to help them finish their quantum tunnel and save Janet.

Enter Ghost (Hannah John-Kamen, Killjoys, Tomb Raider) – who wants a component that might save her life – and Sonny Burch (Walton Goggins, Justified, SIX) who just wants to make a profit off Pym’s work. 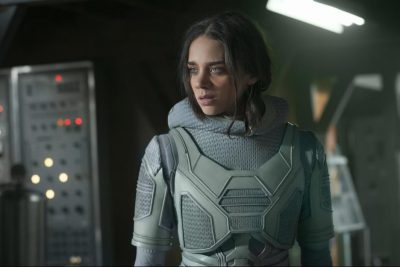 With a script from a five-person squad – Chris McKenna, Erik Sommers, Paul Rudd, Andrew Barrer and Gabriel Ferrari – director Peyton List tackles the much more limited life and death stakes of Ant-Man and the Wasp with vim and vigor.

Recurring gags involving ants (an ant playing the drums is just one hysterical moment); the destruction of the original Ant-Man suit; the problems with the new suit (‘It’s a work in progress!’), Jimmy Woo’s efforts to put Scott back in jail, and some nifty size-changing sequences (some involving fighting; some not), there’s always something happening. 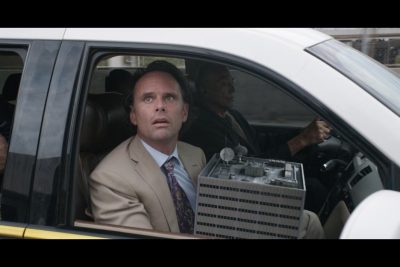 Throw in some same and ironic use of Scott’s ex-con buddies; some genuine drama around Ghost and Janet Van Dyne, and a few seriously sweet family moments between Scott and Cassie (who, it seems, is the smartest one in the family); one extremely touching moment between a young Hope and her mom, and the result is a romp that entertains on more than a few levels – while remaining the Marvel equivalent of a small, personal film.

The effects and 3D are amazing (I won’t spoil anything by trying to describe the full-blown quantum realm – but it is breathtakingly beautiful); the stakes relatable and the results endearing. 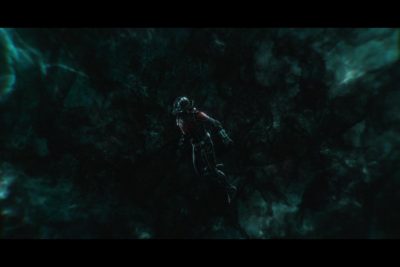 We also get to find out where Ant-Man and the Wasp were during Avengers: Infinity War – but not until the first post-credits tag (and it’s an extremely clever one). A second tag, after credits have run, is a standalone gag that plays into an earlier running gag. (I thought it was perfect; some of the audience didn’t.)

Ant-Man and the Wasp is one of Marvel’s best movies and, by far, the funniest. (Sorry, Rocket!)

Photos from Ant-Man and the Wasp are courtesy of Marvel Studios.