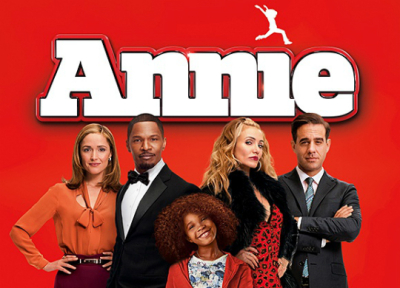 Annie is fostered, along four other girls, by Miss Hannigan (Cameron Diaz) – a woman who narrowly missed fame and fortune as part of C+C Music Factory but got fired just before they made it big and has been bitter ever since. She only fosters the girls for the monthly checks she gets from social services.

Annie was abandoned by her parents but hopes to be reunited with them. Every Friday, she crosses New York City to sit outside Domani, the Italian restaurant they used to frequent.

Stacks has gotten rich selling cell phones and is running for mayor under the guidance of shady campaign manager Guy (Bobby Cannavale). He sees it as a way to further build his telecommunications empire but has fallen way behind in the polls – until Annie crosses his path. Rather, she bumps into him and starts to run off – into traffic – and he pulls her to safety. Passersby catch his actions on their phones (see what they did there?) and post the video online. Next thing you know, he’s a hero and moving up in the polls.

Guy has a moment of inspiration – what if Stacks was to pretend to foster Annie? Stacks takes a bit of convincing – but not too much. Besides, his assistant, Grace (Rose Byrne, Damages, This Is Where I Leave You) can help. She’s already the major reason he gets anything done.

Songs and a certain amount of hilarity ensue. The songs from the original Annie still work well, but some of the additions are kinda ho-hum. Undercurrents of a hip hop sensibility add a bit of zing without being overt enough to distract.

Given the telecommunications wars going on – how many companies want you to use their phones, their plans? – it makes a kind of twisted sense to make Annie’s foster dad-to-be be in that business. There’s nothing like ruthless competition (not that we get to see that in the movie) to make a guy ruthless, too.

The subplot with Guy and Miss Hannigan looking for a couple to impersonate Annie’s parents – the better to pump up Stacks’ chances with a fake happy ending for Annie – starts out way over the top but pulls back just enough to be a tolerable bit. That it leads to a weird chase sequence is a bit much – but the way that Stacks follows Annie is pretty cool.

One place Annie falls short is in casting Diaz as Hannigan. She may make us see the hurt underneath the character’s bitterness, but she can’t sing a lick. Her Little Girls falls flat, literally. On the other hand, because we do get to see her pain, we can almost comprehend why deli owner Lou (David Zayas (Dexter) is smitten by her.

Another is Byrne’s singing – she has a very thin voice – though she survives mostly intact because Grace is largely a dialogue-heavy role.

Wallis turns out to have a better than decent singing voice and, of course, Foxx is more than capable in that area.

Annie is fun. It’s not particularly demanding, but it is much better than I was expecting – and Wallis shows that she does indeed have range and presence.