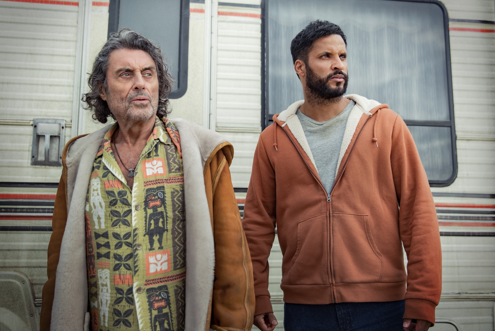 After behind-the-scenes drama that had fans wondering if there’d ever be a second season, American Gods is now beginning to shoot season three.

In Season Three, showrunner Charles “Chic” Eglee, takes viewers into the snowy, eerie, little town of Lakeside, Wisconsin with new guest stars Dominique Jackson (“Pose”) as Ms. World—an incarnation of the infamous Mr. World and Eric Johnson (“The Girlfriend Experience,” “Vikings”) as Chad Mulligan—Lakeside’s Chief of Police, in addition to the previously announced Marilyn Manson (“Salem,” “Sons of Anarchy”) as Johan Wengren, Blythe Danner (“Huff,” “Will & Grace”) as Demeter and Herizen Guardiola (“The Get Down”) as Oshun. Ashley Reyes (“Night Has Settled”) was also announced as a series regular.

“American Gods” chronicles a war brewing between the Old Gods of ancient mythological roots and the New Gods of modern technology. Ex-con Shadow Moon has spent two seasons following his mysterious boss Mr. Wednesday (aka the Norse All-Father Odin) around the country, only to discover at the end of last season that the Old God is actually his father.

Dominique Jackson as Ms. World: As leader of the New Gods, Mr. World must adapt with the times, taking on a new form when it suits his purposes this season—Ms. World. World is looking to control destiny with a mysterious new piece of technology that, if brought online, will have the power to dominate humanity’s attention. And in this modern age, attention is worship.

Eric Johnson as Chad Mulligan: As Chief of Police in the sleepy town of Lakeside, Wisconsin, Chad Mulligan spends his days mediating disputes between townsfolk he’s known his whole life. This trademark low-key diplomacy works well for Chad until a local teenage girl goes missing, igniting a panic of paranoia and blame that threatens to tear Chad’s beloved town apart.