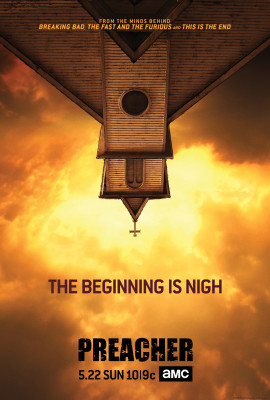 If you want to see the series premiere of AMC’s Preacher before anyone else else, you may get that chance.

AMC will be screening the series premiere in the four cities that most creative photos, videos or comments about why their hometown deserves an exclusive “Preacher” screening. Follow the jump for details.

New York, NY – April 12, 2016 – AMC announced today a social media campaign that will bring special pop-up screenings of the highly-anticipated new series “Preacher” to super fans’ hometowns in the weeks leading into the show’s May 22nd premiere.  Beginning today, fans can visit Twitter or Instagram to post their most creative photos, videos or comments about why their hometown deserves an exclusive “Preacher” screening using the hashtag #PreacherFanScreenings. AMC will select four cities or towns for a screening of the series’ pilot episode on April 30, May 7, 15 and 21.  Fans can visit PreacherFanScreenings.com for more information.

Based on Garth Ennis and Steve Dillon’s popular ‘90’s comic book franchise of the same name, “Preacher” is a supernatural, twisted and darkly comedic drama that follows a West Texas preacher named Jesse Custer (Dominic Cooper), who is inhabited by a mysterious entity that causes him to develop a highly unusual power. Jesse, his badass ex-girlfriend Tulip (Ruth Negga) and an Irish vagabond named Cassidy (Joseph Gilgun) come together and when they do, they are thrust into a crazy world populated by a cast of characters from Heaven, Hell and everywhere in between.  In Sunday’s premiere episode of “Fear the Walking Dead,” AMC released official Key Art and a new series sneak peek.  To view the new clip, visit this Link (embed code below).

“We can’t wait to give comic book superfans, who have been eagerly awaiting an adaptation of this property, the opportunity to see ‘Preacher’ before its official premiere on AMC,” said Linda Schupack, EVP of Marketing for AMC/SundanceTV.  “These early screenings are a great way for us to provide a special experience for the legions of loyal and enthusiastic fans and, we hope, turn them into evangelizers, telling their friends to check out the show when it premieres.”

“Preacher” will premiere Sunday, May 22nd at 10:00 p.m. ET/PT on AMC, following the mid-season finale of “Fear the Walking Dead.” Encore presentations of the pilot episode will air the following Sunday, May 29th at 9:00 p.m. ET/PT providing viewers with an opportunity to catch-up during the holiday weekend. New episodes will resume Sunday, June 5th at the series regular time of 9:00 p.m. ET/PT.