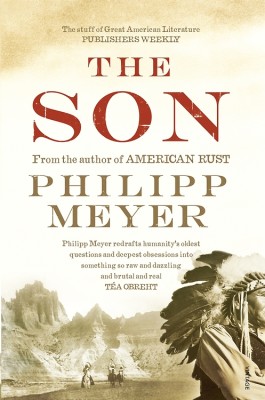 AMC has ordered a straight-to-series adaptation of Philip Meyer’s novel, The Son. It’s ‘the multi-generational story of America’s birth as a superpower through the bloody rise of one Texas family.

AMC’s The Son is expected to set for a 2017 premiere. For more, follow the jump

AMC ANNOUNCES STRAIGHT-TO-SERIES ORDER FOR “THE SON,” BASED ON THE ACCLAIMED NOVEL BY PHILIPP MEYER

PASADENA, CA – January 8, 2016 – AMC announced today from the Television Critics Association (TCA) Press Tour a straight-to-series order for the drama “The Son.” Based on Philipp Meyer’s acclaimed novel that was a finalist for the Pulitzer Prize for Fiction  in 2014, the series is a multi-generational epic telling of the story of  America’s birth as a superpower through the bloody rise of one Texas family.

Season one will follow two concurrent time periods: One, the story of young Eli McCullough after he is kidnapped and indoctrinated into a tribe of Comanches in 1849, and the other, 60 years later, when we see a grown Eli struggle to maintain his family’s cattle empire during the turbulent Bandit Wars of South Texas.

Produced by AMC Studios and Sonar Entertainment, “The Son” will be written and executive produced by Meyer, Lee Shipman, Brian McGreevy and showrunner Kevin Murphy (“Defiance”). Jenna Glazier will produce for Sonar Entertainment. AMC has ordered 10 one-hour episodes, with an expected premiere date in 2017.

“Philipp Meyer’s epic novel The Son is storytelling at its finest, chronicling the engrossing lives of a Texan family over six generations and serving as an incredible foundation on which to build an equally gripping television series,” said Joel Stillerman, president of original programming and development for AMC and SundanceTV. “We’re looking forward to partnering with Philipp
and the terrific team behind ‘The Son’ to bring this beloved story to life.”

“‘The Son’ is more than a rollicking historical fiction,” said Murphy. “I was attracted to the deeper themes the book explores concerning the nature of family honor and legacy, the psychology of violence, custodianship of land, racial scapegoating – America grew up struggling with these issues, and we’re still doing so today.”

“We couldn’t be more excited to be bringing ‘The Son’ to life on AMC,” said Meyer. “This will be a big show in which we dig deep into the epic story of our country. AMC has given us a huge template, and we will be going even further and deeper into our characters and their stories than I could have ever imagined when I wrote the book.”