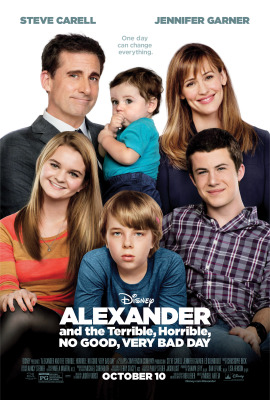 Alexander Cooper (Ed Oxenbould) is the twelve-year old loser in a family of winners: dad Ben (Steve Carell) is a rocket scientist who lost his job when NASA cut back, but is up for a job with a prestigious video game maker that is exactly in his wheelhouse; mom Kelly (Jennifer Garner) is on the verge of a huge promotion to vice-president for a publisher of kids and young adult books; sister Emily (Kerris Dorsey) is the lead in her school’s production of Peter Pan, and her brother Anthony (Dylan Minnette) is dating the hottest girl in school (Bella Thorne) – and the couple are about to be crowned Duke and duchess at the prom.

There’s a baby brother, Trevor, but he’s still fixated on his butterfly soother, so he has yet to establish himself as either a winner or a loser – though that doesn’t keep him from being a part of the family’s terrible, horrible, no good, very bad day.

After a day in which, among other things, he accidentally burns down the school science lab with his crush, Becky’ (Sidney Fullmer) science notes and learns that the most popular kid in his class has scheduled his birthday party on the same night as his, Alexander makes a wish – that his family could have a bad day so they can learn what he feels like most of the time.

The next day, everyone oversleeps and things get (much) worse from there – Emily has a cold; Ben’s job interview takes a bad turn when Trevor gets his hands on a permanent (green) marker; Kelly’s project suffers a hideous misprint and the celebrity reading (Dick Van Dyke in a priceless cameo) goes horribly awry; Anthony wakes up with a huge zit on his forehead – and things just snowball. Except for Alexander, who learns that Popular Kid has the chicken pox, so his is the only birthday party that night.

Alexander (the movie) is one of those films that Disney used to be able to knock out with frightening regularity in the fifties and sixties – a G-rated comedy that is, at worst, inoffensive (though a potential PG nightmare is averted at the last minute). It would have been so easy for Carell and Garner to phone in their roles, depending on their terrific chemistry to carry the day, but they really commit to the madness and give the movie a solid, occasionally inspired grounding. 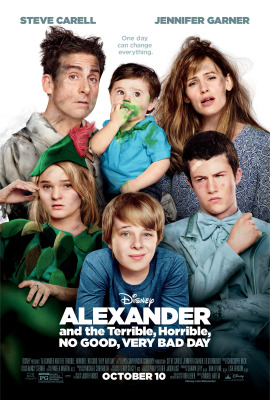 Dorsey and Minnette have both been around for some time, despite their youth, and follow Carell and Garner’s lead, giving themselves over to their characters and their horrendous day – but it is Oxenbould who gives Alexander and the Terrible, Horrible, No Good, Very Bad Day its heart.

Seeing his family go through a day that really matches the awfulness he’s become used to, Alexander becomes the heart and soul of the movie – and Oxenbould captures both his misery and his unexpected optimism in a natural way that keeps things from going quite as badly as they might have.

Plus, a kangaroo! (Alexander is an Australia buff, big time!)

Taking the book by Judith Viorst and expanding it into a fast-paced, genuinely affecting movie was the task for scriptwriter Rob Lieber and director Miguel Arteta. Leiber’s script is filled with warmth and silliness in equal measure and Arteta turns it into an eighty-minute kaleidoscope of emotion and slapstick.

I laughed out loud far more than I had anticipated – it’s always a Good Thing when studios don’t actually put all of the movie’s best bits in the trailer. Plus, I had about a third of my medium-sized drink left as the credits rolled.

Alexander and the Terrible, Horrible, No Good, Very Bad Day is not great art, but it is great fun.