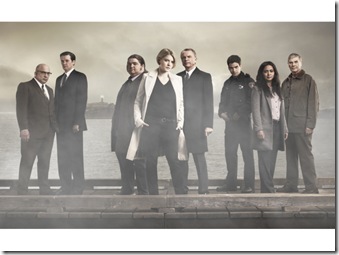 ‘On March 21st, 1963, Alcatraz officially closed. All the prisoners were off the island. Only that’s not what happened. Not at all,’ is Sam Neill’s opening narration for Alcatraz [two-hour premiere, FOX, Monday, Jan. 16th, 8/7C] as FBI Agent Emerson Hauser.

The first half of the series’ two-hour premiere opens on March 20, 1963, as two guards arrive for duty in Alcatraz and find the prison deserted. In the present day, a young girl sneaks away from a tour group in the prison and finds a man sleeping in a prohibited area. And the new Fox series is off to the races! 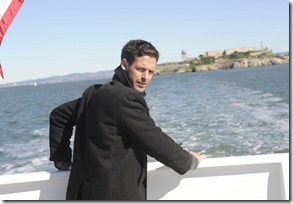 In quick order, we see the apparent vagrant and learn he was prisoner 2024, Jack Sylvane – a man who is prevented from seeing his wife on visiting day by an assistant warden who plants a weapon in his cell. In the present, Sylvane borrows a book on Alcatraz from a member of the tour group and learns things are very different than he remembers; we meet Detective Rebecca Madsen [Sarah Jones] as she’s investigating the murder of E.B. Tiller when an imperious FBI agent named Emerson Hauser [Sam Neill] enters and tells her she’s done. Taking a photo from the scene, she finds Sylvane’s print, but Alcatraz expert Dr. Diego Soto [Jorge Garcia] tells her that’s impossible – Sylvane died thirty years ago.

Things get really strange when Sylvane passes a phone booth and the phone rings – and it’s for him!

We learn that Madsen was raised by her Uncle Ray [Robert Forster] and that Ray and her grandfather were guards on The Rock. 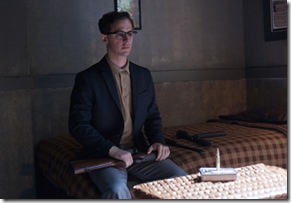 The second half of the two-hour premiere, Ernest Cobb, opens with a slim, reasonably well dressed, bespectacled man in a park with a picnic basket – only besides the sandwich and bottle of pop that constitute his picnic lunch, there’s also a Winchester M70 rifle with a telescopic sight, which he puts to use by shooting three apparently random people at an amusement park. The episode moves back and forth between Cobb’s imprisonment in 1960 and the events of the present.

Madsen and Soto quickly learn that he commits three shootings in three days and then moves to a different city. While they’re trying to figure out where Cobb will strike next, Hauser and Dr. Lucy Banerjee [Parminder Nagra] question Sylvane in hopes of learning how he came to be in the present.

In Edward Cobb, the team sustains its first casualty, a further mystery arises about Madsen’s father, and there is a startling revelation about Dr. Banerjee.

If the first hour of Alcatraz’s two-hour premiere seems a bit on the clunky side – there’s a lot of exposition required to set up the series – hour two moves at a much better clip. We don’t see how Cobb arrives in the present, nor do we spend much time on exposition in general – outside of the necessary glimpses of Cobb in 1960 to set up what he’s doing in the present.

There’s considerably more action in hour two, as well, and it serves to build characters as well as provide and/or release tension as needed. There’s also a cool interstitial/bumper – for act ins/act outs at commercial breaks – that plays into the tone of series. You’ll definitely know it when you see it.

With its two vastly different inmate mysteries in the series premiere, Alcatraz looks to be well worth an audience’s time. It’s smart, unexpectedly witty and works on both character and concept levels.