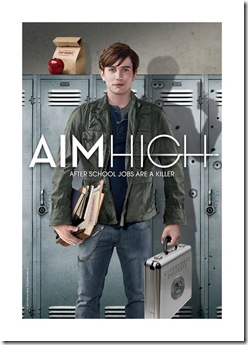 VIEWERS CAN BECOME PART OF A SHOW BY TAPPING INTO THEIR PROFILE TO CREATE A UNIQUE, SEAMLESS SOCIAL VIEWING EXPERIENCE WITH THEIR PHOTOS, TEXT AND FRIENDS INTEGRATED INTO EACH EPISODE

By choosing to watch “Aim High” in a personalized viewing mode through the show’s Facebook page, viewers will be able to see themselves or their friends integrated into select scenes throughout the series – from their photo appearing on a student body election poster, to having their name seen as graffiti on the bathroom wall. This video application not only allows consumers to have an immersive and engaging viewing experience, but also a social one where they can share comments, scenes and Tweets about their favorite moments from the show.

“Facebook is an increasingly influential destination for discovering and acquiring movie and television content,” said Thomas Gewecke, President of Warner Bros. Digital Distribution.  “This effort takes video distribution to a whole new level by making the actual viewing experience personal and social in a truly innovative and entertaining way.”

“The ability for fans to become part of a production by simply watching a show is truly revolutionary,” said McG, Producer of “Aim High.” “I’m delighted that Aim High is the first to embrace this technology and I’m looking forward to including this in future productions.”

“Aim High” is the story of a young man leading a double life – juggling his studies by day and serving as a government operative by night. This series chronicles the life of Nick Green, a junior who’s just starting a new school year as one of the country’s 64 highly trained teenage operatives.

When he’s not handling international spies, Nick is dreaming of Amanda Miles, the most popular girl in school who’s cool, intelligent and very alluring. Amanda mercilessly flirts with Nick, but before he can enjoy her advances he has to avoid Derek – her overly protective boyfriend who threatens him for even looking at her.

Warner Premiere, part of Warner Bros. Entertainment, specializes in the development and production of both features and digital content for home entertainment platforms. Past projects include Another Cinderella Story, Scooby-Doo! The Mystery Begins and Batman: Under the Red Hood, as well as the digital series Watchmen Motion Comics. Warner Premiere is at the creative forefront in the made-for-home entertainment marketplace, producing properties that exemplify the commitment to story, production and brand equity for which Warner Bros. is known.