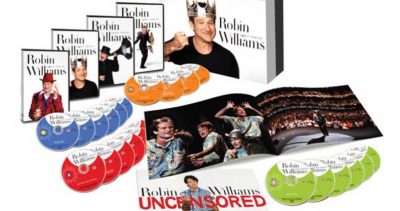 “You know that cartoon, that Tasmanian devil that comes out and just spins –
he was that, but eloquent and hilarious.”
— Billy Crystal

“He was like something waiting to happen…a very powerful anomaly.”
— Steve Martin

“Everybody else prepared, Robin was just a natural…and he worked on every level.”
— Jay Leno

THIS SEPTEMBER, JOIN TIME LIFE FOR THE DEFINITIVE DVD COLLECTION CELEBRATING THE COMEDY CAREER OF A BELOVED ICON

FAIRFAX, VA (September 25, 2018) – Robin Williams was a generational talent, graced with comedic brilliance, rapid-fire improvisation, and a deep well of warmth and compassion that translated to every role he inhabited. From his breakout role in ABC’s Mork & Mindy to his Academy Award®-winning performance in Good Will Hunting, the iconic actor displayed an inimitable artistry that made him beloved by millions. This September, join Time Life, in conjunction with the Trustees of the Robin Williams Trust, in celebrating the incomparable career of the singularly innovative actor with ROBIN WILLIAMS: COMIC GENIUS.

Never-before-released concert specials, including Robin’s full MGM Grand Garden stand-up from 2007 and the Montreal stop on his last tour, a conversation on stage between Williams and comedian David Steinberg

11 hilarious episodes of Mork & Mindy, including the two-part pilot!
James Lipton’s Emmy® Award-nominated 90-minute interview with Robin on Inside the Actors Studio, plus deleted scenes

A comprehensive collection of Robin’s USO shows around the world
Original and newly created bonus features including behind-the-scenes footage, local highlights from tour stops, promos and more. Featurettes include: The Early Years, San Francisco: Where It All Started, Comic Genius, and TV’s Best Guest

Uncensored, electric, intense and unfailingly hilarious, Williams made it his life’s work to make people laugh–whether he was holding forth on culture, politics, the human body or drugs–with razor-sharp wit and insight. As his long-time friend Billy Crystal said, “In the 40 odd years he was in front of us, especially on television, he never let you down. He was always funny, he always did something new.” And, in unforgettable ways, ROBIN WILLIAMS: COMIC GENIUS reveals and celebrates the wide range of his incredible talents like never before.

About Time Life
Time Life is one of the world’s pre-eminent creators and direct marketers of unique music and video/DVD products, specializing in distinctive multi-media collections that evoke memories of yesterday, capture the spirit of today, and can be enjoyed for a lifetime. TIME LIFE and the TIME LIFE logo are registered trademarks of Time Warner Inc. and affiliated companies used under license by Direct Holdings Americas Inc., which is not affiliated with Time Warner Inc. or Time Inc.
# # #