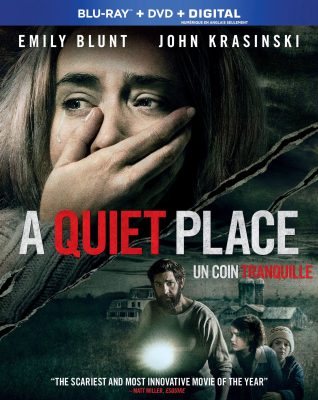 John Krasinski’s A Quiet Earth – the year’s scariest movie to date – is coming to home video in digital (June 26th) and on $KUHD, Blu-ray and DVD (July 10th).

The 4KUHD and Blu-ray editions will include three featurettes on the film’s production, editing and visual effects.

“The scariest and most innovative movie of the year”
-Matt Miller, ESQUIRE

A true cultural phenomenon that transformed the film-going experience for millions of viewers, A QUIET PLACE is a taut and original thriller that follows a family who must navigate their lives in silence to avoid mysterious creatures that hunt by sound. Knowing that even the slightest whisper or footstep can bring death, Evelyn (Emily Blunt) and Lee (John Krasinski) are determined to find a way to protect their children at all costs while they desperately search for a way to fight back. The film earned a 95% fresh score on Rotten Tomatoes and generated an extraordinary $175M+ at the domestic box office.

The 4K Ultra HD and Blu-ray Combo Packs take viewers deeper into A QUIET PLACE with behind-the-scenes footage exploring the exceptionally unique sound design, the riveting visual effects, and how the cast and crew created the movie’s distinctive atmosphere both on set and on film. The 4K Ultra HD and Blu-ray Discs™ also boast a Dolby Atmos® soundtrack remixed specifically for the home to place and move audio anywhere in the room, including overhead, and the 4K Ultra HD disc features Dolby Vision™ high dynamic range (HDR), which delivers greater brightness and contrast, as well as a fuller palette of rich colors.*