For the third night of this franchise, The Purge: Election Year blends new and familiar to create an uneven concoction. Writer, director, and overall mastermind of the series, James DeMonaco, sits at the helm once again, but one can’t wonder if even he is wishing this franchise will end soon on the highest note possible before falling into farce like so many other series—this is particularly notable considering the protagonists of the story are in essence trying to halt what would be the likely topic of future installments.

It has been two years since Sergeant Leo Barnes (Frank Grillo) spared a man’s life—the trophy he sought during the events of The Purge: Anarchy. He now finds himself serving as the head of security for Charlene Roan (Elizabeth Mitchell), a senator who is running for president on the platform of ending The Purge once for all. To no one’s surprise, this stance is wildly unpopular, especially among those in power.

What transpires next is both predictable and familiar—on the night of The Purge, despite assuring her that all will be okay, Roan finds herself on the streets of Washington, D.C., running for life under the protection of Barnes and ragtag group of supporters. Violence naturally ensues for the remainder of the film, as expected. 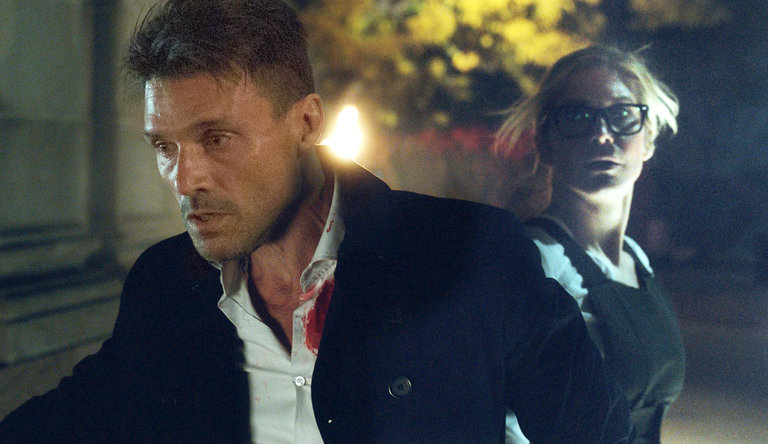 The Purge franchise has had an admirable run thus far. Starting with the first chapter, The Purge offered an intimate story based upon a rather novel (if not horrific) concept. While the first movie was largely confined to a singular home, The Purge: Anarchy opened up the world considerably with the introduction of Grillo’s Barnes, a character who was conflicted, likable, and entertaining to watch in the action-hero type role.

The foundation that held prior two entries together was the commentary that DeMonaco was seemingly offering, or rather, the food for thought. In both The Purge and Anarchy, DeMonaco presents a crazy world and allows the audience to judge it. With Election Year, the core is less about message, and more about the shock value it can provide. While this won’t bother all fans of the franchise, newcomers may find the whole affair gratuitous.

Those craving clever and silly new ways to see the masses feast upon each other, the arsenal buffet the murders dine at includes swords, axes, guns, and even power tools, so there is no disappointment in that category. And Grillo confirms his status as a B-list action star, a position he seems perfectly content and comfortable with. He dispatches his foes effectively (if not occasionally creatively), much to the audiences’ pleasure.

If there is a singular issue that one could point to as the weight holding The Purge: Election Year from being truly great, it is that this particular vignette does little to advance the overall world-building that was so effective in Anarchy. There’s a strange and weird hypocrisy in effect—if the purpose is to enjoy this entrant to warrant further demand for future installments, why work so hard to hate the core mechanic? See: The Hunger Games and the problem that franchise had with the last few movies.

In the end, The Purge: Election Year is fine, but isn’t quite as sharp as the previous films. Hardcore fans will leave feeling moderately satisfied, as I’m not sure expectations for something like this could ever be particularly high.