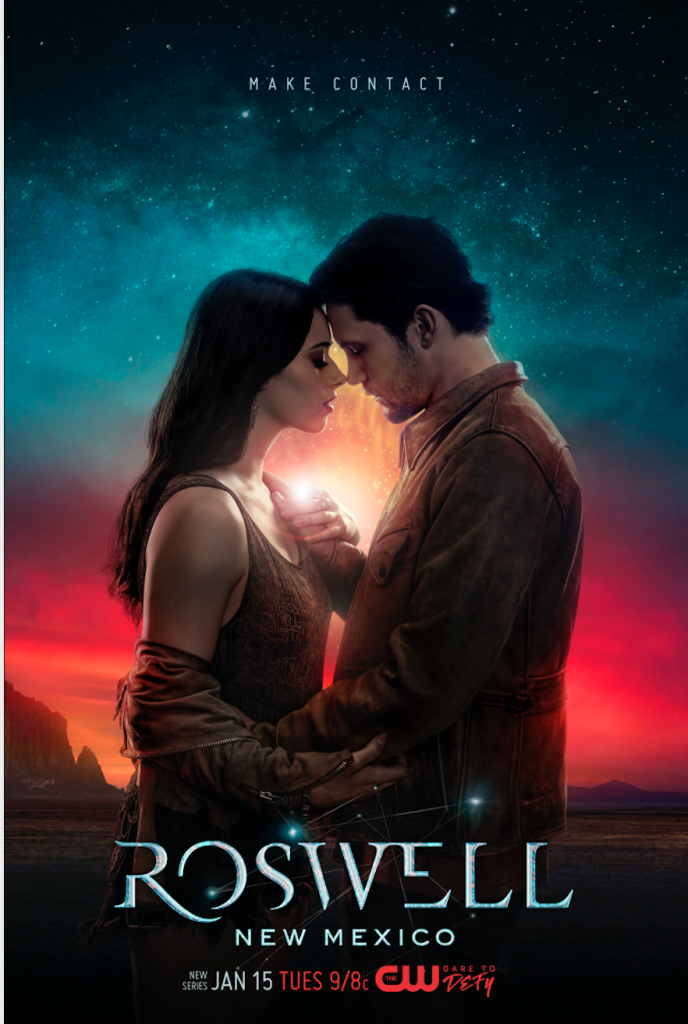 No matter how awful everything turned out the first season of the 1999 series Roswell will always remain one of my top 10 favorite first seasons of all time. The show was utterly brilliant in terms of storytelling, character set up, initial world building, use of music and more. It still pains me how all of that good will was squandered in Season 2.

Based on the initial 3 episodes of Roswell New Mexico, it seems this is going to be a more faithful adaptation of the books than the original series was. This is where I admit that I haven’t read the original books, but I have read the full book treatments, so I get the gist of the changes between the books and original series.

Unlike the original series that never once mentioned anyone’s heritage, this show isn’t afraid to wear its politics on its sleeve. Liz Ortecho (Jeanine Mason) is Mexican American and they live in New Mexico on the front lines of the current anti-immigration fervor being kicked up by this current administration.

I appreciate the fact the show doesn’t shy away from the issues Mexican Americans like Liz face, but I also don’t want to see it mentioned every 10 minutes. I know my attitude stinks and I would be one of the first ones to say “They aren’t going to mention the problems Mexicans face in that part of the country?” There is a fine line. The dark cinematography and indoor locations do not properly showcase Santa Fe, New Mexico where the series was filmed. Seems pointless to shoot on location if you don’t actually show it off.

After her sister Rosa died in a drunk driving accident, Liz Ortecho and her family became the town’s punching bag. She left right after graduation never looked back until 10 years later, for a reason never explained, Liz moves back to town and immediately encounters her former HS Lab Partner the mysterious Max Evans (Nathan Parsons). The two clearly have a mysterious connection that was never pursued.  All the characters that we know and loved from the original returned, but radically changed, just for the sake of change.

Sheriff Valenti is now a female character played by Rosa Arredondo, Kyle Valenti (Michael Trevino) is a hot Doctor, Alex (Tyler Blackburn) was injured while he was in the military and now trying to figure himself out and Michael (Michael Vlamis) is still an angry screwup. Every guy in the show has a scruffy looking beard which makes them look like they are in the late 30s and not late 20s.

Max’s sister Isobel (Jessica Treska) and Michael are against Max pursuing this relationship because they are aliens who don’t know anything about their past and are just trying to blend it. They do not want to attract the attention of the Government or alien hunters.

When Max saves Liz, he has to tell her the truth and the ramifications of that revelation is where the show’s mystery lies. This version of Liz is fairly unlikeable and not the sweet innocent cherub she was from the original series and the character change is jarring, but I’ll let it slide because of everything that happened to her before she left and the death of her sister clearly messed her up.

There are so many do not reveal warnings (DNR) on the screeners, I can’t talk about a lot of the more obvious differences between the two series. I’m one who does not like to compare one thing to another. It is usually a pointless exercise but as a fan of the original I find it nearly impossible not to.  I would be ok with this series and the new cast if they kept it in the same timeline and back stories as the original show.

I don’t get nor understand the reason to do this weird reboot, remake, reimagine thing. None of the changes are for the better and it feels like the changes were made, just because they wanted to be as far away for the original as they could get, while still marketing this as the thing we used to love. This show isn’t going to make fans of the old series happy at all and I’m not sure who they are targeting with this pointless exercise.