The seemingly bucolic town of Derry looks like a place you could settle down – if only it weren’t its high statistics for people going missing (with adults it’s 6% higher than the average; with kids it’s ‘much higher’).

When kids start to go missing, for the rest of the town that means missing posters on telephone posts and in shop windows – for Bill Denbrough (Jaeden Lieberher), it’s barely noticeable until his younger brother, Georgie (Jackson Robert Scott) goes disappears while floating a waxed paper boat in the gutter.

Six months later he still refusing to believe his little brother is dead – not that that matters to the quartet of bullies that harass him and his friends – a bunch of 12-year old boys who collectively call themselves the losers. 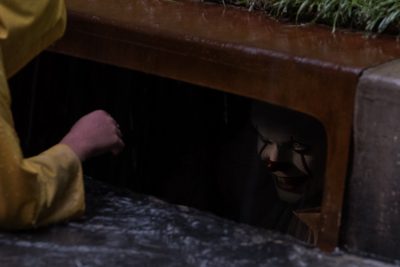 Come summer, as it always must, and Bill persuades his friends to help find whatever is culling the kids from the town. It’s a bunch of stock characters – Stanley Uris (Wyatt Oleff), the Jewish kid preparing for his Bar Mitzvah; Ben Hascomb (Jeremy Ray Taylor), the fat kind with the big brain – and a sense of poetry); Richie Tozer (Finn Wolfhard), the guy with the huge glasses and an inhaler for his asthma; Eddie Kaspbrak (Jack Dylan Grazer), the runt of the gag, given to talking non-stop when he’s nervous, and Bill – who stutters under pressure.

Not long after a spooky experience, Bill decides the group has to kill the whatever-it-is and keep any potential future kids from danger.

They are joined by Mike Hanlon (Chosen Jacobs), whose grandfather is teaching him the routine at the slaughterhouse, and by a pretty girl, Beverly Marsh (Sophia Lillis) – who has a real-life fear of her far too attentive father.

Ben makes the mistake of saying he wants to find Georgie – which sets off a series of events in which the kids see their worst fears its first attempt on their lives and decide the evil clown must die.

Writers Chase Palmer and Cary Fukanuka provide the bones of the script with Gary Dauberman making a pass before shooting it. The result is a pretty tight script that allows plenty of information to be delivered without turning a character into Basil Exposition.

The scares come on slightly irregular beats (The cat is a beauty!), and make incredible use of songs and score. While IT utilizes a host of children with real skills, most scenes are without adults (most of the kids would approve of that) – and the adults that we see most are definitely not shining examples of humanity.

At intervals, the Losers are harassed by a quartet of bullies – until one of the bullies fall prey to Pennywise. Finally, they are able to stand up the remaining three – provoking the leader, Henry Bowers (Nicholas Hamilton) to take some murderous action that leads to a fine moment of suspense in the final act.

An early exchange revealed that if they stood alone the Losers could suffer damage and, maybe, die. When the kids finally confront Pennywise the final time, they go into battle armed with spikes and Mike’s grandfather’s bolt gun.

Here is the perfect time to mention how good Bill Skarsgård is as Pennywise. He is, briefly, very charming but as Pennywise’s malevolence becomes apparent, his voice, posture and energy shift into dark, grittier tones. His laugh is a match for Mark Hamill’s Joker – not quite of this earth, and definitely chilling. 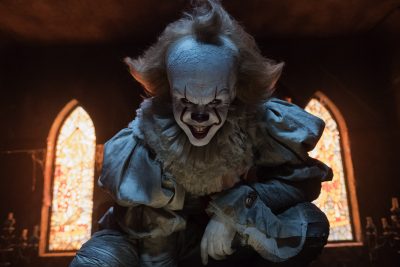 The film’s makeup and effects (practical and CG) are first-rate. Primarily used for Pennywise, his victims, and as psychic threats to the Losers, they are flamboyant without being ostentation (like King’s writing…).

Benjamin Wallfisch’s score is properly supportive – subtle in scenes where the boys all try to impress the pretty girl who has joined them; very Bernard Hermann-by-way-of-John Williams when the action and suspense rev up.

When required, cinematographer Chung-Hoon Chung manages to make even sunny days seem filled with dread – though when it’s just the Losers hanging out, he makes it warm and cozy (even at the inevitable swimming hole).

Director Andy Muschietti takes the script (by Chase Palmer and Cary Fukunaga, with a final polish by Gary Dauberman) and gives it life. He gives us just enough character delineation to make us believe that the Losers, while capable of making some boneheaded decisions (and let’s face it – kids do make bad decisions!), are at their best as a group – and he gives Skarsgård enough room to make his Pennywise at least as effective as Tim curry’s (though the difference is like night and day).

IT: Chapter One is a pretty dazzling iteration of the first half of King’s novel. I can’t wait for Chapter Two.