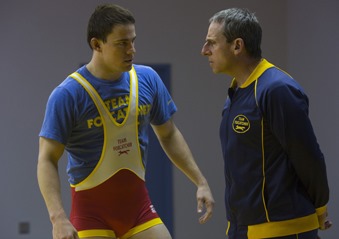 Foxcatcher is slated for a November 14 release and has amassed a lot of critical buzz for all three leads – Channing Tatum, Mark Ruffalo and Steve Carell (I saw it at the Calgary International Film Festival where it closed the festival to much applause) . Check out the new trailer after the jump.

When Olympic Gold Medal winning wrestler Mark Schultz (Channing Tatum) is invited by wealthy heir John du Pont (Steve Carell) to move on to the du Pont estate and help form a team to train for the 1988 Seoul Olympics at his new state-of-the-art training facility, Schultz jumps at the opportunity, hoping to focus on his training and finally step out of the shadow of his revered brother, Dave (Mark Ruffalo). Driven by hidden needs, du Pont sees backing Schultz’s bid for Gold and the chance to “coach” a world-class wrestling team as an opportunity to gain the elusive respect of his peers and, more importantly, his disapproving mother (Vanessa Redgrave).