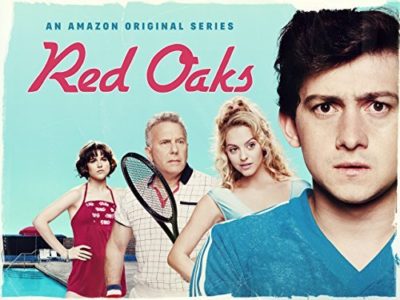 When amazon’s Red Oaks returns on November 11th, things will be in a state of flux following Red Oaks’ assistant tennis pro David Meyers’ parents divorce. On the plus side, there’s his budding romance with Skye – the daughter of the club’s president – though she’s just returned from a year abroad and is just a little bit more worldly.

Amazon has just released a trailer for Red Oaks Season 2. check it out after the jump.

Welcome back… to the summer of 1986. When “Top Gun” was #1 at the box office and life was much simpler… For everyone but the clueless members and misfit staffers of Red Oaks Country Club.

For assistant tennis pro David Meyers it’s been a year of upheaval. In a freefall following his parents’ divorce, forced to drop out of NYU and forego dreams of becoming a filmmaker, his one silver lining has been his budding romance with Skye, the daughter of club president Doug Getty. But when Skye returns home from a year abroad in Paris with more worldly ways and a newfound independence, David finds himself caught in the middle between his strong-willed girlfriend and her equally stubborn father.

Meanwhile David’s family and friends are all struggling through their own complicated summer of love. Roguish head pro Nash decides to try his hand at gold-digging, valet-turned-bartender Wheeler continues his quest to win the heart of lifelong crush Misty, and ex-spouses Sam and Judy explore the New Jersey singles scene.

From Wall Street to Parisian boulevards, Manhattan courtrooms to SoHo art galleries, backyard weddings to back nine sexual encounters, Red Oaks is about all the funny places we find ourselves… on the road to finding ourselves.