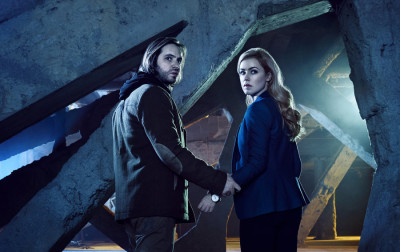 The basic idea of the series is that of the film, of course – Cole (Aaron Stanford, Nikita, Traveler) is sent to our present from decades in the future (2043, to be precise) in order to find and kill the man responsible for unleashing, however accidentally, a plague that kills off over seven billion – that’s 7,000,000,000 people – effectively ending the world as we know it.

In the past, he finds himself needing the help of virologist Dr. Cassandra Railly (Amanda Schull, Suits, Pretty Little Liars) – especially when it becomes apparent that the man in question, known to Cole as Leland Frost (Zeljko Ivanek, Madame Secretary, Damages) might not be solely responsible.

Stanford, in the Bruce Willis role, is less twitchy and more focused – and far less grimy looking. Schull, in the Madeline Stowe role, is somewhat more easily convinced of Cole’s origins – thanks to the pilot’s giving her an opportunity to see, firsthand, that he’s not from around here (temporally speaking). 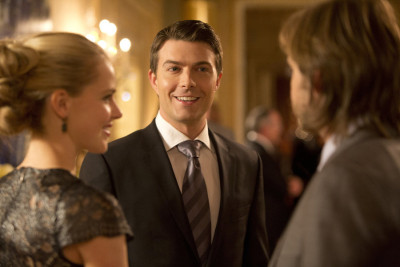 The drama in the series, at least judging from the first two episodes, comes more from outside forces that did not exactly appear in the film – but there’s not a lot I say about that without getting well into spoiler territory. Suffice it to say that ‘The Army of the 12 Monkeys’ seems to have a much different origin here.

The adaptation of the David Peoples and Janet Peoples screenplay for Gilliam’s film was written by series developers/creators Terry Matalas & Travis Fickett (both of Nikita fame) and the pilot was directed by pilot master Jeffrey Reiner (Awake, Helix).

The pilot introduces the main characters by inserting them into highly stressful situations right off the bat, so we see how they function in their worst moments; brings the tension down a bit so we can see them dealing with the repercussions, and then ramping up the stakes again. There are worse ways to get an audience onside quickly.

Stanford’s Cole is simultaneously more intelligent and less quick to adapt to changing circumstances than the movie version, but Stanford gives him an underlying innocence that keeps him from being just a time-hopping executioner. He’s accepted that the fate of the world hinges on his being able to kill someone, but that doesn’t mean he’ll enjoy it – indeed, he expects that he will cease to exist (or will never have existed) if he succeeds. His motives, at least here, appear to be genuinely beneficent.

Schull’s Railly is a woman who is comfortable with her life – she’s articulate, poised and confident. She is a respected person in her field and is more than a bit jolted by both her initial encounter with Cole (at knifepoint, in her car) and later (when she sees that something that I referred to above). She also seems more resilient than Cole, at least at first. 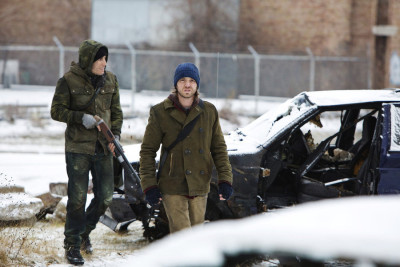 Matalas and Fickett do a solid job of setting up the basic for the series in the pilot – and setting up the difference in their approach to The Army of the 12 Monkeys in the second ep. While the show does explore a lot of themes in common with the movie (fate, destiny, love and second chances, as the press release says), though, it is lacking two things that Gilliam’s movie had in abundance – wit and humor.

Possibly that’s because they had to set up the series premise – and especially its differences from the movie – and maybe future episodes will have more of that, but for now, that’s a point against the series.

Technically, the show looks pretty good. The cast is solid – Barbara Sukowa (Lola, Center Stage) is fine as Cole’s nominal boss in the future, Jones; Kirk Acevedo (Fringe, Dawn of the Planet of the Apes) is likable as Cole’s best friend, Ramse, and Noah Bean as Cassie’s former flame, Aaron, is suitably confused – and the plot is intriguing.

Despite my qualms about the show going in, 12 Monkeys shows a lot of promise and by the end of the second episode it was beginning to show signs of living up to it. I’ll definitely be checking out those additional screeners.

Photos by Jeff Riedel and Alicia Gbur/Courtesy of Syfy