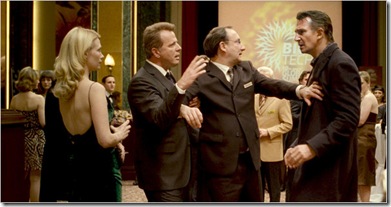 Taken established Liam Neeson as an action hero with tremendous acting chops. The vastly superior Unknown confirms that he does, indeed have the goods.

A man leaves his wife, briefly, and returns to find that she not only doesn’t know him, someone else has taken his place with her – and his identity! This is something we’ve seen before – in the brilliant but canceled Nowhere Man, the man goes to a restaurant washroom and returns to his table to find another man carrying on a conversation with his wife – and claiming to be him. The wife acts as if he is a complete stranger. The set up, and the length of time, are different here, but the initial situation is similar.

Biologist Dr. Martin Harris [Neeson] is on a flight to Berlin with his wife Liz [January Jones] to give an important presentation at a biotech convention. When they arrive at their hotel, Martin discovers that his briefcase has been forgotten and, while his wife registers at the hotel, he hails a cab to return to the airport. An accident forces the cab off a bridge into the river and only the courageous efforts of cab driver [Diane Kruger] save his life. He awakens four days later, in hospital, and when he returns to the hospital, Liz not only doesn’t recognize him [‘Excuse me… do I know you?’], she is accompanied by someone else- let’s call him Martin Mk II [Aidan Quinn]!

The rest of the film deals with Martin dealing with his terrifying situation. Is he crazy? Is Martin Mk II the real deal? Has Martin Mk I somehow taken on the identity of someone else as a result of the trauma of the accident [he banged his head in the accident and his heart stopped for a considerable period – consequences of such a trauma could account for such a situation]? Has he superimposed Martin over a case of trauma induced amnesia?

Before Unknown finishes, he tracks down the mysterious cabbie, Gina, a Bosnian immigrant with a very good reason to have not hung around after saving his life, and Ernst Jurgen [Bruno Ganz], a former Stasi [East German Secret Police] officer who is proud of his time in service. He persuades Gina to help him and she, in turn, points him to Jurgen.

Unknown is a true international thriller – based on a French novel [Out of My Head by Didier Van Caulwelaert]; written by two Americans [Oliver Butcher and Stephen Cornwell], and directed by a Spaniard [Jaume Collet-Serra]. It is an unlikely achievement given Collet-Serra best known previous movie was the horrendous remake of House of Wax [starring non-actor Paris Hilton].

Collet-Serra utilizes the austere beauty of Berlin in winter to frame a tale that grows more preposterous by the minute, though the brilliant cast keeps us with it – never allowing our willing suspension of disbelief to waver. There is a good deal less violence than Taken, but what there is nasty and essential.

Neeson makes Martin Mk I a thoroughly enthralling protagonist [I’m not sure you could really call him a hero – you’ll see what I mean when you seen the film] with his unique ability to simultaneously project confusion, fear and determination. Quinn, as Martin Mk II, is equally effective as he rejects the claims of this crazy imposter. There is a terrific scene where the two Martins square off to persuade a colleague that they are each the real Martin. It’s a scene that is one of the major clues as to the real situation and that‘s all I’ll say about that.

Kruger has an icy Grace Kelly-like beauty, making her one of two such in the film, with January Jones. Where Jones is there mostly for applying that beauty to the rejection of her husband, Kruger has a character that is more interesting – and far warmer once we get to know her.

Ganz steals every scene he’s in as the sickly, aged ex-Stasi. He might be the world’s gentlest private eye, but his heart is pure steel and he has a gift for perceiving the truth of matters.

Collet-Serra builds suspense with a measured pace that carefully doles out information while providing the staples of such movies – three excellent car chases, down and dirty hand-to-hand fighting, gunfire and even a whale of an explosion. As the film’s level of believability dwindles, the actors become more grounded – until finally, everything goes completely nuts. Yet, we accept the film’s developments not only because of the work of the brilliant cast and Collet-Serra’s direction, but also because – as the preposterousness grows, there are clues as to the real nature of the situation that – even though mostly very subtle – balance things out in a satisfactory manner.

Although it may be damning with faint praise, Unknown is the best film so far this year.