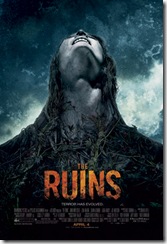 What begins as an effort to get “a little culture” before a spring break filled with partying ends, turns into a descent into a new kind of hell.

The Ruins is the second film to be adapted from a novel by Scott Smith – the first one, A Simple Plan, earned him an Oscar® nomination. Since Smith also did the adaptation for The Ruins, there was certainly some cause to be hopeful that it would be something more than just another scary picture.

As spring break comes rattling to a close, Jeff [Jonathan tucker], Amy [Jena Malone], Eric [Shawn Ashmore] and Stacy [Laura Ramsey] allow a new-found friend, Matthias [Joe Anderson] to persuade them to visit a Mayan ruin that’s the site of an archaeological dig that his brother is working on. And things go hellishly wrong.

As plots go, that is not a particularly complex one. What makes it work, though, is that we get to watch the group for awhile. We see them partying and recovering from partying – and by the time they hire a taxi [a half-ton truck that’s in less than perfect condition] to drive them into the jungle, we’re familiar with their relationships and senses of humor. 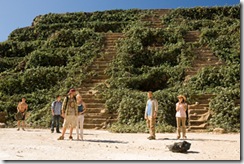 Jeff, a med student, is the most serious of the bunch; Eric is impulsive, but not to the point of stupidity; Amy is kind of shy until she’s had a few [then, watch out!], and Stacy is generally more fun when she’s sober. Matthias is a friendly guy with none of the reserve we have come to expect from stereotyped German in movies.

The group only finds the Mayan pyramid after finding a camouflaged trail – the first sign that things may not be all sunshine and roses. When they approach the ruin, a group of men follow – but not too closely – and refuse to let them leave. 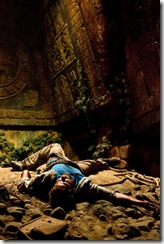 Unlike a lot of horror films, The Ruins unfolds slowly. Because we are given the time to relate to the group, we become more involved in the action when things begin to go south. Also unlike most horror films, the majority of the action takes place in bright sunlight. There are scenes in the pyramid, but they aren’t a huge proportion of the film.

When it does come, the blood and gore are definitely not for the squeamish, but The Ruins is not a splatter flick and the gore is integral to the plot, not a bid for a cheap scare. Indeed, in one particular sequence near the climax of the film, the gore causes an audience reaction that is equally parts of revulsion and sympathy.

There things that I would like to have seen that aren’t shown – it might have been cool to see more of the inside of the pyramid, for instance. As things stand, however, The Ruins is like that snowball that rolls down the hill, moving faster and faster – and getting bigger and bigger. Carter Smith, for whom this is but he his second feature, does a solid job. Because he dwells on the members of the group for as long as he does, they cease being characters and become people. Once things become more ominous, he picks up the pace nicely – though there are scenes where slowing things down adds greatly to the tension and dread. 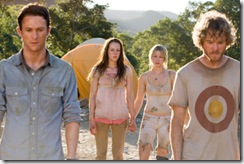 Because most The Ruins plays out in daylight hours, the contrast of some of the gore with brilliant sunlight and beautiful vistas of the jungle [as seen from the top of the pyramid] is genuinely startling. The effects are also extremely effective – there are a few significant moments when the group first reaches the top of the pyramid where we are given hints of the danger to come in the smallest of movements – movements that are definitely deliberate.

The young cast does a solid job. Joe Anderson makes us believe it when he has to go through a double amputation [Wait! What?], and both Laura Ramsey and Jena Malone are standouts [especially in that gory sequence I mentioned earlier].

I might have wanted more of certain things, but The Ruins delivers a solid mix of character and scares. As horror films go, it’s far more coherent than most, and has characters that we can actually care about. It’s willingness to not completely give in to the usual horror clichés [at least not as many] result in a fresh take on what scares us. The final scene will no doubt induce some nervous laughter and is a perfect ending to a pretty original film.

One thought on “The Ruins: Horror In Broad Daylight!”