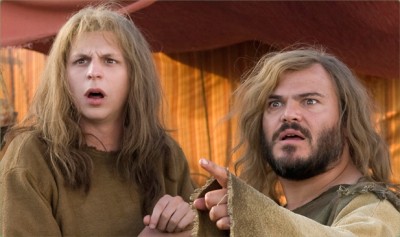 The story of two Neanderthal-like men, who stumble and bumble away from their village and through a series of famous early Biblical stories, makes up the so-called plot of Year One. On paper I could see how a studio executive greenlit this project especially since Harold Ramis, writer of Caddyshack and Animal House, was at the helm.  However if any movie yet to be released in 2009 is worse than Year One, I’ll be shocked.

Let’s start with Jack Black and Michael Cera. Black plays his big dumb persona which he’s done a million times in various other movies, and it’s beyond stale at this point. To compliment him we have Cera who has proven he has one character he can ever play in a movie and that is, Michael Cera. In all of his big movies: Superbad, Juno and Nick and Nora’s Infinite Playlist and now Year One, Cera literally is the exact same person every time. It’s like Derrick Zoolander’s multiple “looks”.

To say the plot is paper-thin would be an insult to paper. Now granted, I know the film is supposed to be silly, but there’s nothing holding this thing together. For an excruciating ninety plus minutes, Year One seems to make it up as goes and can’t decide if would rather bore or gross the audience the death with eye-rolling lines and overly disgusting imagery. When did vile become funny?

Not one of the characters should be spared a smack upside the head for being annoying. I actually felt embarrassed for some of the cameos and supporting actors. Even Paul Rudd, Hank Azaria and Oliver Platt can’t save the scenes they are in as their discomfort oozes from the screen.

To top it off, the movie isn’t even well made. It takes a lot to notice in a comedy that the editing is bad, but somehow Year One pulls it off. Scenes just seem to end abruptly mid-action or dialogue. At one point Cera’s wig is falling off, and you can clearly see the glue line and his real hair underneath.

Sure, a line or two made me chuckle but it’s like being forced to eat a bucket of lima beans in order to have half of an M&M for dessert (apologies to the pro-lima bean community). Year One just isn’t worth your time or money. If you need a comedy, go see The Hangover again.

4 thoughts on “MOVIE REVIEW: Year One Is One Long Waste of Time”