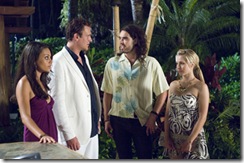 Hey it’s been a whole two or three months since the last Judd Apatow produced flick.  This time he applies his successful comedy formula to Forgetting Sarah Marshall. I’ve figured out the method to Apatow’s success, he uses the same script and characters in all of his films only he switches between teen comedies and adult comedies. But all of his films are essentially the same. I will say, as a hater, that with Forgetting Sarah Marshall, I’m finally aboard the Apatow train. The funny thing about this movie is, that it’s not that funny. Oh, you’ll get a few chuckles, but it’s not laugh out loud funny. It actually tries to be a little subtle and show more heart.

Star and Writer Jason Segel, who wrote the wretched Knocked Up and director Nicholas Stoller (who also directed the upcoming Pineapple Express) have crafted a cute story about a television composer, Peter Breter (Segel) who gets dumped by his television star girlfriend, played by Kristen Bell who is really stretching her acting abilities here. In one of the film’s funnier moments he tries to forget her by having a series of one night stands. When this doesn’t work his brother in law, Brian (Bill Hader) tells him to take a vacation.  Naturally this doesn’t work because Sarah just happens to be there with her new lover, a sex crazed rock star (Russell Brand).  The first hour of Marshall fills a little long in the tooth, we get that Peter just got dumped we don’t need to have it beaten into the ground. The more we see of Sarah the less we like her. The film does a good job of showing balance, we see Sarah through Peter’s rose tinted eyes and as she really is – the cliched, vapid, Hollywood Actress who doesn’t know what she wants and becomes competitive when she realizes that Peter has started hanging out with the Front Desk Clerk. The movie looks amazingly beautiful, but then it’s almost impossible to make Hawaii look ugly.

I love Kristen Bell in Veronica Mars but the more I see her outside of her trademark role, the less I like her. It doesn’t seem like she’s really trying that hard, she just is. I think the surprise in this film was Russell Brand who had most of the good bits in this. Segel does a great job of making you care about Peter but I almost couldn’t get past his uncanny resemblance to Judge Reinhold.  Marshall is a cute little, forgettable film.