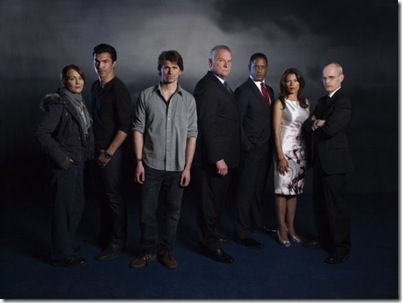 Of all the TV premieres to hit Comic-Con 2010, The Event is the one that had the most – and the best – buzz! Now NBC is offering five lucky cities [or towns] the chance to host an exclusive screening of the show’s epic pilot episode by simply demanding it on Eventful.com.

After its much buzzed about world premiere at Comic-Con, NBC is offering five lucky cities or towns the chance to have an exclusive pre-broadcast screening of the new high-octane conspiracy thriller "The Event," if they simply "Demand It!"  The network, who partnered with Eventful Inc. and their "Demand It!" platform, is providing fans with the opportunity to participate by logging on to http://eventful.com/theevent to demand an early screening of the pilot episode in their area.  The top five cities who "Demand It!" most will win.

The announcement was made by Adam Stotsky, President, NBC Entertainment Marketing.

"’The Event’ premiere episode delivers the action and adventure it promises, so we are excited to share it and feed the enthusiasm generated from Comic-Con," said Stotsky. "Demand It! creates an innovative and interactive win-win opportunity for fans and the show — what better way to spread the word."

NBC will notify viewers through Facebook, Twitter, Fan It challenges, blog outreach and traditional media, as well as Eventful’s 15 million entertainment consumers. Using Eventful’s "Demand It!" platform, users will be able to easily spread the word about the screenings to their Facebook friends and Twitter followers to help generate additional buzz and get more "Demand It!" votes for their local communities. The network will hold exclusive screenings for the five cities with the highest amount of demands. All of this will help reinforce "The Event" as this Fall’s most anticipated and buzzed about new shows.

About "The Event":
"The Event" is an emotional, high-octane conspiracy thriller that follows Sean Walker (Jason Ritter, "The Class"), an everyman who investigates the mysterious disappearance of his would-be fiancée, Leila (Sarah Roemer, "Disturbia"), and unwittingly begins to expose the biggest cover-up in U.S. history.