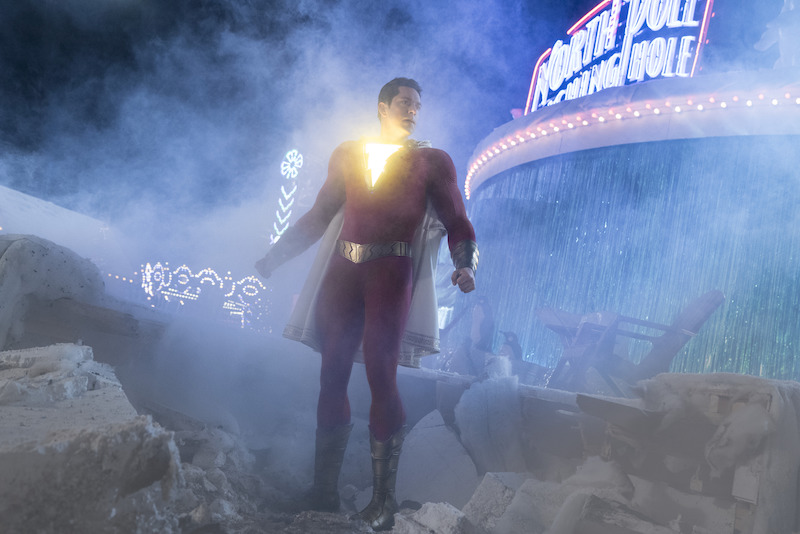 How do I say this? Shazam. Shazam! Or do I go Gomer Pyle style and say, Shazam!, Shazam, Shazam? These are the big questions of the Universe that keep me up at nights. No seriously. Anyhoo we’re here to talk about the state of the Super Hero movie world, namely the folks at the World […]

Somewhere C.C. Beck is giggling joyfully over what he’s seeing in the trailers adapting his Golden Age character. The new trailer for SHAZAM! confirms that they have, indeed, gotten it right. SHAZAM! opens on April 5th.

The new trailer for SHAZAM! finds Shazam looking to be ‘some of your finest beer) and looking to buy a lair. This superhero is not so serious. Check out the trailer below. SHAZAM! will be in theaters on April 5th.

If you were worried that Warners/New Line wouldn’t get the SHAZAM! movie right, they did. Asher Angel (Billy Batson) and Zachary Levi (Shazam!) combine to present a superhero who feels just right – a kid in a superhero’s body. SHAZAM! bolts into theaters on April 5, 2019.

Office Uprising follows the story of an underachiever working at a major weapons manufacturing firm who finds that his co-workers have been “weaponized” by Zolt, a new energy drink designed for the military. Office Uprising premieres on Crackle on July 19th.

Zachary Levi (Chuck, Tangled, Thor: Ragnarok) has been chosen to host Syfy Presents Live From Comic-Con this summer. Airing live on SYFY from Thursday, July 20 to Saturday, July 22 at 11/10c, the three-night broadcast will once again bring the largest genre-focused celebration in the world to fans across the U.S.

Disney Channel seems certain they have a hit on their hands with Tangled: The Series – the network has ordered a second season more than three weeks before the series Premieres on March 10th.

Disney’s unorthodox retelling of the Rapunzel story in Tangled was validated when the movie became a huge hit. Now, the original Rapunzel and Flynn (now Eugene) from the film – Mandy Moore and Zachary Levi – are voicing the characters in Disney Channel’s Tangled: The Series. After being locked up in that tower for so […]

Ashley Judd, Richard Kind and Jeffrey Tambor lead a host of additions to Disney Channel’s Tangled: Before Ever After. Judd will play Rapunzel’s mother, Queen Arianna, while Tambor will reprise his film role, Big Nose, and Kind will portray Uncle Morty.. Also joining the cast are: Eden Espinoza as Rapunzel’s handmaiden and confidant, Cassandra; Jeff […]

NBC has unleashed a storm of eleven character motion posters for Heroes Reborn – and they look like harbingers of bad, bad weather. Some of them may also hint at the characters’ powers – especially Tommy. Check them out after the jump.

NBC has released the first trailer for Heroes Reborn that shows footage from the event series. Check it out after the jump. Heroes Reborn premieres on Thursday, September 24th (8/7C).