There’s a Paul Walker-sized hole in the middle of The Fate of the Furious that the creative team and cast try to gloss over with bigger and more ridiculous stunts than ever before.

The addition of Jason Statham’s Deckard Shaw as a member of the team, and Scott Eastwood as Mr. Nobody’s new aide help, but the loss of Walker – whose Brian O’Conner was the series’ real heart – cannot be completely overcome.

END_OF_DOCUMENT_TOKEN_TO_BE_REPLACED

Happy Holidays from GeekScholars Movie News! In their last episode of the year, the hosts start off with a discussion of the 2017 Golden Globe Nominations, then weigh in on the quasi-sequel to Suicide Squad which will focus on Harley Quinn, Catwoman, and Poison Ivy. From there the GeekScholars share their thoughts on three new trailers for: Despicable Me 3, Fate of the Furious, and Dunkirk.

To close things out, Fox, Jill, and Chris talk about the awesomeness of Rogue One, completely spoiler-free! 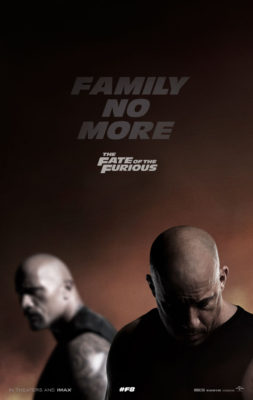 Can the unthinkable happen? Will Dom turn on his family?

The Fate of the Furious has a host of returning players, including mysterious CIA guy Mr. Nobody (Kurt Russell) and Deckard Shaw (Jason Statham), along with a lethal lady who is queen of internet crime.

The first trailer is a bit long – at 197 seconds – but like even the longest movie in the series, it feels like half that. Check it out after the break.