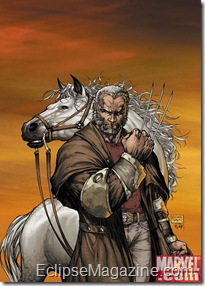 Three universes collide this year during writer Mark Millar’s run on exciting Marvel titles. Beginning with his newest epic tale, 1985, Millar lays down the foundation for things to come as Marvel: 1985, FANTASTIC FOUR and WOLVERINE all intertwine in a very big way. After his run on Ultimates, and his unforgettable blockbuster Civil War, Millar explores remote and familiar corners of the Marvel Universe in ways that only the man behind such past blockbuster series could. Watch as these stories come to life with the help of long time Ultimates collaborator Bryan Hitch, Civil War’s Steve McNiven, and renowned film and comic artist Tommy Lee Edwards.

END_OF_DOCUMENT_TOKEN_TO_BE_REPLACED 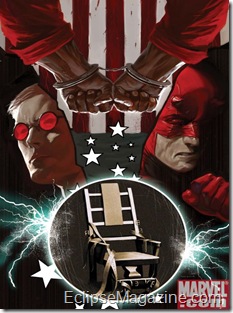 Hey there True Believers, here’s your official list of comic books, collections and posters arriving in comic stores on May 29th, 2008. For more information on any of these titles, and on upcoming mighty Marvel releases, please visit http://www.marvel.com/catalog/?date=2008-05-29 or contact your local comic book retailer at 1-888-comicbook. Stay tuned each week for a brand new list of Marvel releases so that you’ll never miss your favorite heroes in action!

END_OF_DOCUMENT_TOKEN_TO_BE_REPLACED 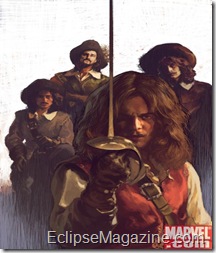 I love the swashbuckler and there’s no greater story than the Three Musketeers. The folks at Marvel Comics are bringing this classic book to comics and we have some the early pages. It’s brought to us by the team that did their last adaptation – The Man In The Iron Mask, which I started reading on Marvel’s frustratingly half-assed digital comics service. The 6 issue mini-series hits the shelves this month. Take a gander at this beautiful artwork.

END_OF_DOCUMENT_TOKEN_TO_BE_REPLACED

I always said that if you want to get some insight into a popular upcoming film, look no further than the Video Game Tie-In.  I saw The Incredible Hulk Game at New York Comic-Con a few weeks ago and it looks amazingly beautiful – if empty. There are some awe inspiring moments like when you jump off a 30 story building and you see the entire city around you, without any popup or draw-in. Looks gorgeous. But at the same it looked strangely, "antiseptic," with no people or dirt or grime. The game play and design seems to be exactly the same as the last Hulk game, only prettier. But the last Hulk game was pretty darn good for a movie game, so why mess with a winning formula.  Take a look at this latest Making of trailer. 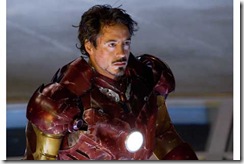 Normally, I’m not into watching clips from films because generally it’s out of context. But I have to say, this Iron Man clip finally has me excited about the film. Check it out.