It comes to me as no surprise that Linda La Plante’s Trail & retribution is a quality series. After all, this is the woman who created Prime Suspect. This collection of six episodes of Trail & Retribution feature David Haymer as Detective Chief Superintendent Mike Walker, Victoria Smurfit as Detective Inspector Roisin Conner, and Dorian Lough as Detective Sergeant David Satchell [until 2006, it appeared as an annual two-part mystery. Now it usually airs five two part stories]. 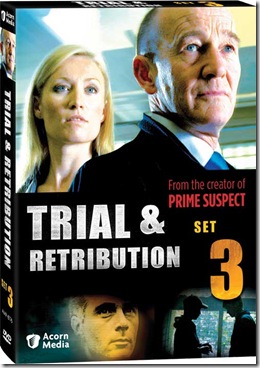 The six eps compose three mysteries: The Lovers, Sins of the Father and Closure. The Lovers concerns the disappearance of newlywed Mark Harrington after he goes to fetch coffee for himself and his bride, Susan [Miriam Heard]. Sins of the Father is about the investigation of the death of honors student Emily Harrogate [Carey Mulligan] – and how it reveals the problems of a “happy family.” Closure finds the team dealing with a serial killer – one of whose murders was investigated by a much younger DI Mike Walker.