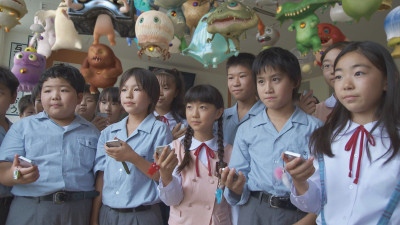 Set in post-Fukushima Japan, the film blends live-action and CGI to tell the story of a boy who moves to the country with his mother, following the death of his father. There he makes a new friend – a flying jellyfish-like creature – and soon learns that he’s not the only child to have such a friend.

Current plans are for Jellyfish Eyes to premiere in New York’s IFC Center on July 15th. Murakami will be present for a post-screening Q&A. The film open day and date on iTunes and Amazon – with a national theatrical rollout to follow. Check out the trailer following the jump.