END_OF_DOCUMENT_TOKEN_TO_BE_REPLACED

Chris Pratt received a star on the Hollywood Walk of Fame yesterday  – accompanied by his on and off screen families.

While this is not the kind of news Eclipse usually covers, this is a slightly unusual case – it’s not been that long since Pratt was the pudgy fifth/sixth lead on NBC’s Parks and Recreation. Plus, Pratt’s new blockbuster, Guardians of the Galaxy Vol. 2 is a mere two weeks away.

Now he’s a superstar of the big screen and, as Bashful Benjamin J. Grimm would put it, ‘The idol o’ millions.’ Also, Prat went old school for the event in a three-piece suit that practically screamed Old Hollywood.

END_OF_DOCUMENT_TOKEN_TO_BE_REPLACED 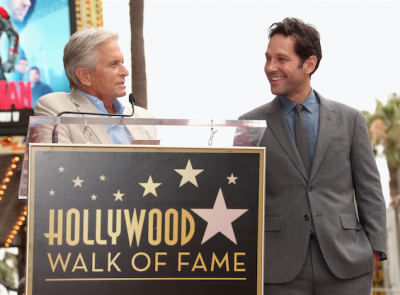 Paul Rudd, star of Marvel’s Ant-Man, has been given a star on the Hollywood Walk of Fame.